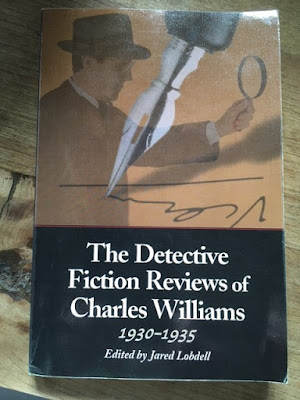 Among his many other accomplishments, Charles Williams was an assiduous reviewer of crime and detective fiction for several newspapers and magazines, during the period 1930-35. These have been collected and edited by Jared Lobdell in The Detective Fiction Reviews of Charles Williams 1930-1935 (McFarland, 2003), and they make fascinating reading.

One of the reviews is an important source for revealing how Williams came to start writing his seven occult thrillers. On 29 December 1933 he reviewed a group of five books, which included The Bride of Fu-Manchu by Sax Rohmer.

Commenting on this, he says (p.104): ‘As for Mr Sax Rohmer, there again my piety, but this time a more dutiful and less exhilarating piety, comes in. There are some few absurd books of my own which exist only because one evening, having finished one of Mr Rohmer’s, I said suddenly to myself: “I also will write a novel.” It wasn’t, when finished, much like any of his, but can one now see the mother in the kid’s milk?” He goes on to complain that “The Mandarin Fu-Manchu doesn’t seem quite as good as he used to be . . .”

Another source, quoted in Grevel Lindrop’s Charles Williams – The Third Inkling (Oxford University Press, 2015, p.116),  gives us the exact date when Williams read the Sax Rohmer novel. Writing to Olive Willis on 23 December 1925, he told her that, having decided to write a thriller: “It took me seven weeks; it was first thought of on 8 July and finished by the end of August.”

This was Shadows of Ecstasy (1933), then called Adepts of Africa, his first novel but the fifth to be published. So far as I know, Williams did not name the Sax Rohmer thriller that inspired him, in a somewhat backhanded way, to start his own career in fiction, perhaps out of tact, for he undoubtedly thought his were better. But can we make any guess at which title this was?

By 1924, Sax Rohmer was already the author of about a dozen novel-length thrillers and it could of course have been any of these that Williams was reading. It might be thought that it was a Fu-Manchu thriller Williams read, and that in his own novel he simply substituted an African adept for Rohmer’s Chinese master, before developing the idea along his own lines. But as he was reviewing a Fu- Manchu novel when he revealed Rohmer’s inspiration for his own work, surely he might have specifically made that link if it had been one in that series that had started him off.

The two Rohmer thrillers to which Williams’ own books are closest are probably The Orchard of Tears (1918) or Brood of the Witch-Queen (1918), since they both involve his own often-invoked figure of a sinister magician,  and like his have somewhat breathless plots. The second of these is the one that I think likeliest, in the absence of other evidence, to have set Williams thinking that he could do that, since it is the one by Rohmer that has the most intricate occult dimension.

However, perhaps there may be a clue in the chronology. Williams had been working for the Oxford University Press since 1908 and was already a busy man-of-letters, well-informed on topical literature. He had read the Rohmer book in question on the tube, going home in the evening from giving a lecture.

It is possible, therefore, that what he had was the latest Sax Rohmer, perhaps picked up from a station book-stall. I haven’t found out if it was in the publisher’s Spring or Autumn lists, but the Sax Rohmer book that appeared in 1925 was Yellow Shadows, a Limehouse thriller which also happens to begin on a train, when a beautiful Chinese woman bursts in on the protagonist and begs him for help.

Other than its tumultuous action and ‘exotic’ dimensions, this book is not particularly close to the book Williams went on to write, but then he does say his wasn’t like Rohmer’s. And perhaps Williams, who could have an impish sense of humour, nodded whimsically to the title of the book he read when he in the end named his own book Shadows of Ecstasy.