Jessie Douglas Kerruish (1884-1949) is probably best remembered for her weird novel The Undying Monster (1922), which was filmed in 1943. It was her third novel, following Miss Haroun Al-Raschid (1917)  and The Girl from Kurdistan (1918). It was in turn followed by only two more books, the first, being another novel, The Hull of Coins (1928), and her final volume, an odd fix-up of stories old and new, Babylonian Nights' Entertainments (1934). But before all of these, Kerruish published three booklets as parts of W.T. Stead's "Books for the Bairns" series. The booklets are each around sixty pages. 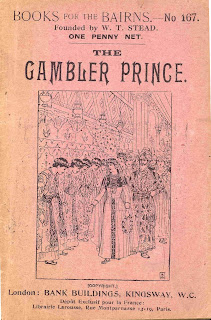 The first was The Gambler Prince and How He Was Saved by His Wife: An Old Story from India, published in December 1909 (no. 217 of the series). It contains three stories. The title story is about how Prince Nala overcomes his gambling problem. "The Boy Who Heard the Silence Speak" is about young Pavo of Scandinavia, who is a deaf and dumb, and who prays to God on Christmas Day to be able to hear. An Angel tells him he will hear the silence speak, and he hears the morning stars sing. The final story, "The Merciful Are Rich," tells of two children who share cakes and milk with a wolf and a bear on Christmas Eve. As animals show up outside, the cakes never lessen and the milk never diminishes. The rich, however, refuse to share, so the wolves and bears devour their livestock. This booklet is illustrated by Brinsley Le Fanu, the son of J. Sheridan Le Fanu. 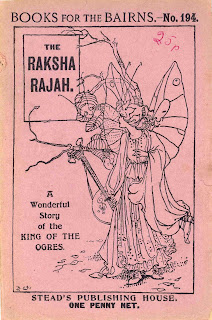 The Raksha Rajah;  or, The King of the Ogres: A Wonderful Story from our Empire in the East. Also the story of The Princess Who Went Out and Begged, published in February 1912 (no. 194), contains two stories. The title story tells of Ravenna, an ogre and evil magician, who long ago did Brahma a favor, and as a reward he has protection against fairies and spirits, but not against man. In "The Princess Who Went Out and Begged," the Rajah of Madras has only a daughter, and thus no heir, for his daughter may not become a ruler. She goes on a pilgrimage and falls in love with the son of an exiled Rajah, upon whom there is a prophecy that he will be dead within a year.  On the fateful day, the Princess appeals for his life. The illustrations are uncredited but many are by Brinsley Le Fanu. 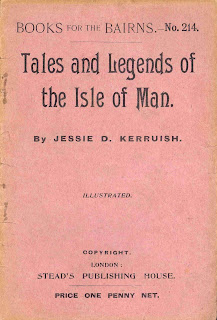 The final of the three books is perhaps the most interesting, for it deals with the Tales and Legends of the Isle of Man. It was published in August 1913 (no. 214). Kerruish was herself born in Hartlepool, but her father and his family were from the Isle of Man. The booklet contains three stories, the first comprising most of the booklet, being six chapters in length. "The Sword Without an Equal" is set in the days when witches and warlocks were still found in the world. It tells of the sword Macabuin, made by a warlock Loan Maclibhuin, the seventh son of a King of Norway.  The other two tales are "Robin-the-Fiddler"--a musician who is hired by a disguised fairy and warned to play only psalm tunes or be lost; and "The Story of Ivor the Knight," in which Ivor asks the bad King of the Manx for permission to marry his betrothed, but the King refuses, after falling in love with her at first sight. Ivor escapes to Ireland where he plots with the Bishop to regain his lost love.  As with the second booklet, the illustrations uncredited but most are by Brinsley Le Fanu, and some are by George Hobbs.

These tales show Kerruish in a different mode from that by which she is otherwise known.

Posted by Douglas A. Anderson at 2:00 AM