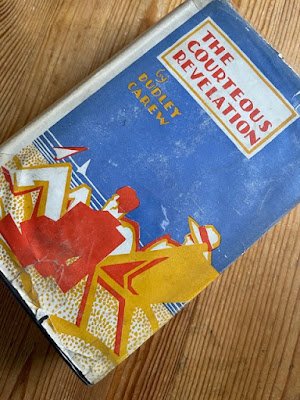 It wasn’t just the dustjacket that made me look more closely at the book, although it had an attractive angular art deco design of a couple in summer clothes on the beach under a bright blue sky.

No: what made me pause was the title. Which at first sounded quaint. I imagined some portly solicitor peering over half-moon glasses. “Well, my boy, now that you have come of age, it is my duty and privilege – yes, a privilege indeed – to reveal to you that you are in truth the rightful Lord of All the Lands That May Be Seen and Most of Those Beyond, Save Only Thunder Ness.”

And at this the young man grew pensive. “And why am I not the Lord of Thunder Ness?” he asked, and the old solicitor sighed.

But in fact Dudley Carew’s The Courteous Revelation (1927) takes its title from a phrase by Sir Thomas Browne quoted as an epigraph in the book: "I do think that many mysteries ascribed to our own inventions have been the courteous revelation of Spirits . . . " Now this sounded promising. It suggested a novel that would involve at least a glimmer of a mystical dimension.

It starts pleasantly enough with Peter, a bank clerk, in the third-class carriage on a train to a station in deepest Somerset, yea beyond even Yeovil. He is on his fortnight’s holiday and is full of relief at his release from drudgery. Then we get some back-story. Peter’s mother came from a genteel family and his infancy was spent in a beautiful house by a river. But at the age of six his father died and his mother remarried, to a profligate bounder who soon ran through the money. The family home was lost: and on leaving school, Peter was articled to a bank.

He finds his fellow bank-workers brash and vulgar.  However, he is not all snob: when he escapes to The Oval to watch the cricket he strikes up a conversation with a salt-of-the-earth gor’ blimey working man and they share some rueful feelings about cricket and life in general.

Class evidently troubled Carew. An excellent article at The Cricket Monthly by Gideon Haigh discusses a later novel, Son of Grief (1936), which also explores class displacement. There was then a marked distinction between cricketers who were Gentlemen (amateurs) and those who were Players (professionals, and often working-class). There were even Gentlemen vs Players matches.

Son of Grief concerns a young gentleman who has to cross the divide after a somewhat lively amatory liaison makes him a social outcast. He eventually achieves liberation with the cricket-fancying wealthy widow of a Northern radish tycoon. Though he was evidently sincere in wanting to explore class questions, Carew’s approach is unfortunately fairly artless: he is not able to transcend caricature.

Even so, I persevered with The Courteous Revelation, because I like books that begin with a train journey to lonely country, and I wanted to see how the implied mystical dimension developed. And it was just as well I did, for once his character alights at the station we are soon in a different atmosphere.

Peter is invited to stay at a charming country house by a young woman he encounters. The reader soon sees that this is his childhood home, and she is his mother, as she was when he was a young boy: and yet he is there as an adult stranger from a later time. Some sort of time-slip has taken place. This world is at first, though not for long, idyllic: but how has it happened—and how long can it last?

There is a particularly effective scene when Peter walks to a neighbouring property across the fields, but finds when he gets there that the house is a mildewed ruin with rusting gates. Evidently, he has now strayed back into his own contemporary world again. The spell, or whatever it is, does not extend all that far from the village where he is staying.

Back at his childhood home, the emotional complications of his parents’ life begin to be revealed and things develop a tenser edge. The smooth bounder is too much in evidence, but Peter realises that he is powerless to change anything. When he tries clumsily to intervene, he is asked to leave.

He returns to London and picks up the threads of his humdrum life, but is now reconciled to it. He rejects art, poetry and sophistication in favour of the boisterous enjoyments of the colleagues he previously deplored and the girlfriend he had half-heartedly wooed. It’s a slightly odd, rather over-emphatic transformation and also feels rather banal after the mysterious interlude.

Dudley Carew (1902-1981) is known today, if at all, as a friend of Evelyn Waugh from schooldays. He published a memoir of him, A Fragment of Friendship, in 1974. He was the son of a clergyman, from Haywards Heath, Sussex, and fell under Waugh’s spell at their public school, Lancing College.

An autobiography, The House is Gone, appeared in 1949. It is a rather diffident book, and Carew himself notes that he cannot write with the same sense of the numinous about childhood as Forrest Reid. Indeed, it has a somewhat dutiful tone, rather like a list of acknowledgements to the schoolmasters, college friends, cricketing colleagues and others he has known.

He worked for the London Mercury and played for The Invalids, the touring cricket team run by the editor, J C Squire, and the most interesting chapter in his memoirs is about this episode. He was also a cricket correspondent for The Times, and published several books on the game, including England Over (1927) and To the Wicket (1946).

His brief obituary in the 1982 edition of Wisden, the cricket almanac, is curtly approving, noting that though at Lancing ‘he was not in the XI, he became well known as a cricket journalist . . .  He was certainly one of that company who tried to raise descriptions of matches from mere reporting to literature.’

Carew, it seems to me, could have been a writer of stories of strange wonder in the English countryside in the de la Mare style: he has the gift of imagining fully a world out of true from the usual one, and presenting it with measured credibility. He catches moments well, brittle silences, a garden at dusk, a fraught starlit conversation. The Courteous Revelation at its best has an elegiac ambience, and succeeds in exploring an otherworldly possibility with plausibility.