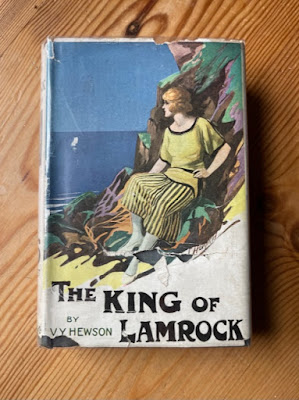 V Y Hewson was the author of two novels, Juliet (1920) and The King of Lamrock (1921), both from the publisher Philip Allan, often associated with weird thrillers (they once invited would-be writers in this field to send them manuscripts, marking the envelope ‘Creeps’).

The first was described by the publisher as ‘A study of the passion of sex, exemplified in a young married woman of great physical beauty and mentally alert, vigorous, and self-reliant. She rejects the moral conventions . . .’ However, in case the casual peruser should find this encomium somewhat over-stimulating, the publisher moves swiftly to dampen his ardour: ‘The book is a sex novel, but handled with the utmost seriousness and modesty’. Furthermore, the heroine ‘comes to a reasoned and self-imposed domesticity’. Unfortunately, this makes her sound like a particularly pensive golden retriever. Perhaps the book is better than this: I haven't been able to find it.

The second book was praised by Edward Shanks in a London Mercury review, and that was how it came to my notice. Shanks had a taste for the weird, championing M P Shiel and later writing several novels with fantastical elements, including a novel of pagan survivals, Old King Cole (1936). He is discussed in my Sphinxes and Obelisks.

The King of Lamrock is a colourful, imaginative story, with ambiguous aspects of the supernatural. The protagonist is the scion of a line of West Country squires noted for their red hair and violent tempers. He is aware of and wary of this stormy heritage, which he regards as bad blood, poison within him. After a violent quarrel with his father he leaves the family home, vowing never to return.

He goes to an island ten hours sailing from the coast which had once belonged to his family but was sold. This is, by tradition rather than strict law, semi-independent: perhaps its inspiration was in part Lundy in the Bristol Channel, though there are also aspects of Tresco in the Isles of Scilly (it has a ruined abbey, now converted to the parsonage). Shanks may possibly have recalled this when, in Old King Cole, he describes an obscure village that is also by tradition semi-independent. 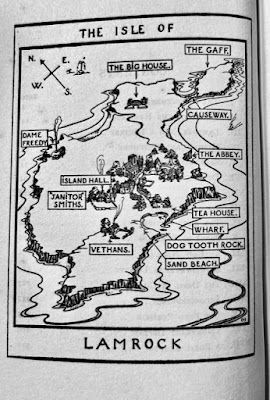 The stormy young man is astonished to be received with excitement and reverence by the inhabitants. An ancestor, known as the King of Lamrock, had won the affection of the islanders, who have even preserved his sayings in a book. Moreover, the return of his descendant has been foretold by an old woman, a soothsayer. He is regarded by some as a reincarnation of the King. (The return of the king – and the good old days - is of course a recurrent motif in folklore).

The young man stays with the parson, a bookish scholar who is writing a history of the island, and learns more about the tradition, while also falling in love with his daughter. She enjoys the local folklore too and introduces him to a stone idol in the garden now used as the pillar for a sundial. These promising themes are not, though, the main direction of the novel. The hero dislikes the superstitions about him and does his best to deflate them. He returns to the mainland, befriends one of his family’s ancient rivals and becomes involved in their affairs, and makes a career in the City.

Shanks thought the author was mistaken to have left the island, and I agree. The rich history and mystery of the first part now subsides into a conventional narrative of family, social and business complications. There’s even a fairly technical section on some dubious financial dealings which the hero uncovers.

However, his destiny on the island is in the end fulfilled and there are more enjoyably picturesque scenes there, though without strongly resuming the superstitious and mysterious elements. With just a bit more focus on those, this could have been an unusual and significant work in the fantasy and supernatural field.

It is, though, a fine example of a different genre, the literature of islands. Lamrock is very well conveyed (complete with map), and its history, legends, topography and the character of its people are convincing. The author certainly makes us feel, as Shanks’ comment implies, that this a place to relish and to cherish. The book therefore joins other island novels with at least some fantastical dimension, such as Vita Sackville-West’s The Dark Island, Vaughan Wilkins’ Valley Beyond Time, Kenneth Ingram’s The Symbolic Island and Bryher’s Visa to Avalon.

I have not been able to find out anything whatever about V Y Hewson, except that the British Library gives his full name as Victor Young Hewson. It seems odd that an author capable of such vivid writing should only write (or at least publish) two books. His work is energetic and bold and I would guess him to have been a fairly young, or at least inexperienced, writer, with a strong imagination that sometimes over-stretches his literary skills: even so, a figure whose further work would have been well worth following.