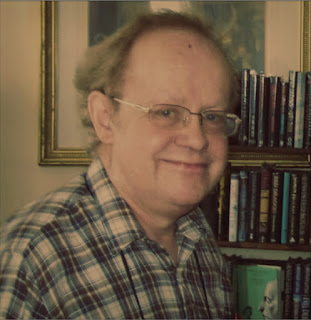 We are very sorry to learn that the veteran ghost story editor, scholar and bookseller Richard Dalby has died aged 68 at his home in Scarborough. Richard was one of the most learned authorities on supernatural fiction of his time.

He edited a succession of well-chosen and pioneering anthologies, including the Virago volumes of women’s ghost stories, the Mammoth Books of ghost stories, the Jamesian collection Ghosts & Scholars (with Rosemary Pardoe) and several popular books of Christmas ghost stories and thrillers. Other noted volumes include The Sorceress in Stained-Glass (1971), Dracula’s Brood (1989) and Tales of Witchcraft (1991), all highly respected and now much sought-after.

He also introduced many editions of rare ghost story collections by little-known authors, taking a leading role in The Ghost Story Press (with David Tibet) and later working with Sarob Press, Tartarus Press and others. His most recent book was characteristic: an edition of previously uncollected antiquarian ghost stories, The Haunted Haven by A Erskine Ellis (Phantasm Press).

Richard’s work was not, however, simply retrospective: he also championed contemporary writers, often bringing them to a wider audience through his books. I can vouch for this personally: Richard was the first to publish one of my own stories professionally. In a manner typical of his wide reading, he had noticed the story in a small press booklet and I still remember the joy his unexpected and courteous request to reprint it brought me.

Nor was Richard’s work limited to the ghost story, though this was his abiding interest. He also acted as an unofficial deputy editor to the journal Book & Magazine Collector, checking the bibliographies and price guides, and contributing many articles throughout its history from 1984-2010. Again, Richard kindly introduced me to the journal, suggesting I write about Michael Arlen in his centenary year, and often putting forward ideas for other subjects. I know I was far from alone in receiving Richard's encouragement and advice.

Richard’s career began in bookshops in London, including Foyles, but he later became a bookseller in his own right, issuing catalogues from his home in Scarborough, North Yorkshire. His Christmas ghost story catalogues were a delight for many readers. He had lived with diabetes since early childhood but undaunted pursued his determination to make a career in literature. He was unflagging in his scholarly zeal and did not let his condition hold him back.

There can have been few people with such a wide and deep knowledge of ghost stories and allied fiction as Richard. He was dedicated in his research into even the obscurest authors and books, often uncovering information that had eluded others. But he was also generous with his work, always willing to share what he had found, to help others, and to discuss ideas. His many friends will remember a shrewd, warm, enthusiastic gentleman, formidable in his learning but companionable and kindly in person.