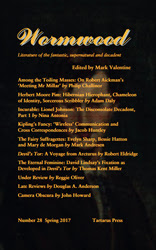 Robert Aickman’s vast unpublished philosophical work Panacea must certainly cast some light on his early thinking and attitude to life, and may possibly illuminate some of his strange stories. Doug Anderson is the first to attempt an analysis of it, starting with an estimate of when it was written, how much was written (rather more than Aickman thought) and broadly what it seems to achieve. In Part 1 of his study, he also provides a succinct summary of the first 27 chapters.

Philip Challinor meanwhile continues his close reading of Aickman’s stories with an essay discussing “Meeting Mr Millar”. The story contains some evident autobiographical details, Philip notes: and, unusually, Aickman provides not one explanation but two. This, however, should make us even more wary than where there are none.

Reggie Oliver’s reviews include a discussion of a recent biography of Elizabeth Jane Howard, and he notes that her impulsive character and intense emotional life were the essential qualities that made her writing so authentic: there was a symbiosis between the life and the literature.

Lionel Johnson might be seen as the last lost decadent – he has never had even the twilight esteem of Ernest Dowson, say, or John Gray. Nina Antonia sets out to put that right with the first part of an extensive study of his life and work. There emerges a figure, “Mystic & Cavalier”, whose dedication to poetry and to austere ideals, not always realised (which of us does?) deserves our respect.

‘Hibernian Hierophant, Chameleon of Identity, Sorcerous Scribbler’ says Adam Daly of his subject, Herbert Moore Pim, an author whose life seems to have been dedicated to provocation. But was there a secret purpose behind his changeable character? Adam suggests a surprising but plausible answer.

We might be equally surprised to find late-Victorian fairy stories linked to the women’s rights movement. But Mark Andresen, in his essay on ‘The Fairy Suffragettes’, explores how three women working in children’s fiction used their stories to provide new models for the independent and creative individual.

Rudyard Kipling, once lauded as the “poet of Empire” is now more often seen as the “relic of the Raj”, says Jacob Huntley. But he was a more complex figure than either the accolade or the dismissal. This essay discusses his abiding interest in the modern and in the realms of the spirit, neither of them obvious fits with his imperialist reputation.

The Italian empire in Libya is the subject of a book reviewed in John Howard’s Camera Obscura column, The Confines of the Shadow by Alessandro Spina, which he suggests is a subtle exploration of contrasting loyalties, painted with “broad and deep strokes of sensual colour.”

David Lindsay was also the author of several vast works, one (The Witch) not yet fully published, the other, Devil’s Tor, published but often hard to find. Robert Eldridge and Thomas Kent Miller offer separate perspectives on the second of these, finding in it on the one hand a profound expression of the otherworldly and on the other a strong allegiance to the eternal feminine.