A Ghostly Story in a Little Blue Book 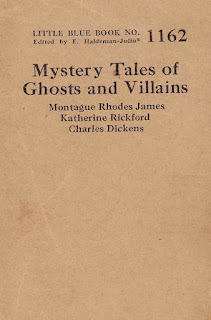 E. Haldeman-Julius was a printer of Girard, Kansas, who published many thousands of little books in the 1920s and for a few decades thereafter. The books were about 3.5 x 5 inches, of varying page-length but none really very long--all were small enough to be staple-bound. Most of them had a blue paper cover; hence the series title of Little Blue Books.

One booklet I picked up ages ago is Mystery Tales of Ghosts and Villians [n.d., but March 1927].  My copy, pictured at right, is bound in brownish paper--there is a printed note on the lower cover that says, "Sorry, we had to use this cover paper because emergency conditions made it impossible to get standard cover stock. We'll switch back immediately after receiving new supplies."

A good deal of what Haldeman-Julius printed was done without authorization, and there are no acknowledgements or any statements of copyright in most of the Little Blue Books I've seen  (though a lot of the texts used were certainly still in copyright). Mystery Tales of Ghosts and Villians collects three tales.  The first is "Number 13" by M.R. James (which originally appeared in Ghost Stories of an Antiquary, 1904).   The third story is one by Charles Dickens, "Dr. Manette's Manuscript," an extract from A Tale of Two Cities (1859). The middle story is the unfamiliar one, which make this Little Blue Book interesting.  It is a seemingly simple story of a ghost having related his own murder, but it has some interesting twists revealed at the end.  It is the only tale I know of by Katherine Rickford, whom I presume was British, for the tale, "Joseph: A Story," first appeared in the British magazine Land and Water, 18 September 1919. It was soon reprinted in the US magazine, The Living Age, for 18 October 1919--The Living Age was made up of reprints from other magazines, mostly British.  From there it was reprinted in two of Joseph Lewis French's anthologies, The Best Psychic Stories (Boni & Liveright, May 1920) and Masterpieces of Mystery, Volume 2: Ghost Stories (Doubleday, Page, November 1920).  And so, after the appearance of Mystery Tales of Ghosts and Villains, the vogue for Katherine Rickford passed.

Does anyone know any biographical or bibliographical details for Katherine Rickford?  A bit of google-fu (using as search terms "The Living Age" and "Katherine Rickford") will turn up for reading a text of "Joseph: A Story." I wouldn't call it a lost classic, but it's an interesting bit of commercial fiction.
Posted by Douglas A. Anderson at 5:00 AM