There is a new interview with Thomas Kent Miller on the re-release of the first of his three Sherlock Holmes (with a dose of H. Rider Haggard) pastiches: 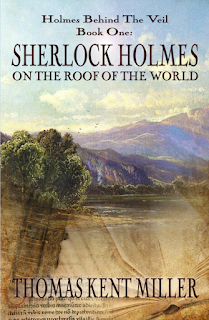 Another way Miller’s books differ from other Holmes pastiches is they are not written in Doyle’s voice, but in Haggard’s [character from She, Leo Vincey].

“I read a lot of the original Arthur Conan Doyle stories to get a clear sense of who Sherlock Holmes is supposed to be, how he would react, the kinds of things he would think and say,” Miller said. “Whenever anything is told through another party the sensibilities of that person change that story. Sherlock Holmes stories all came through Watson. Well, (in Miller’s first book, “Sherlock Holmes on the Roof of the World”), Leo Vincey’s telling his story, so it’s filtered through Vincey’s sensibilities.”

Order the first book from Amazon.com ($9.95) here, or Amazon.co.uk (£6.99) here. (Volumes two and three will be released in September and November respectively.)


Sherlock Holmes on the Roof of the World

Sherlock Holmes finds a 2,000-year-old manuscript presumably written by Jesus, hidden away in a library in Tibet. It’s a murder mystery told by Leo Vincey from the H. Rider Haggard novel, “She.”  Published June 20th, 2017