The world of collectable second-hand books is full of specialist areas of interest, but perhaps one of the most obscure and overlooked is booksellers’ labels. These are usually very small, and are stuck to the front or back fixed endpaper of a book. The earliest examples I have of these labels in my own collection date back to the 1890s, but I am certain they will have been used long before this. The most recent I have is probably from the 1970s. They can be quite fascinating for a number of reasons—most obviously, they give us a glimpse of the book trade of the past.

Every town once had its independent bookshops:

(Above, bookseller’s label in In the Key of Blue by John Addington Symons, Elkin Mathews, third edition, January 1896) 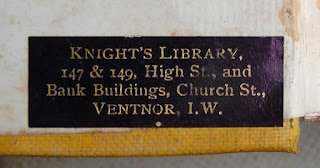 The above label in a copy of The Yellow Book is interesting because it belies the impression that the decadent ‘yellow’ 1890s was purely a London-based phenomenon. It is true that Beardsley, Wilde, Dowson and others were living in the metropolis, scandalising the populace, but it is good to know that the aesthetes of the Isle of Wight were happily purchasing their copies of The Yellow Book from Knight’s Library, Bank Buildings. 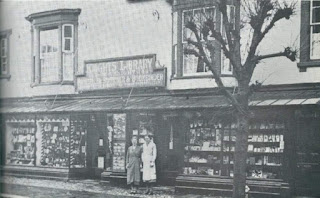 Some of these booksellers might appear a little provincial, but the label below from the Doncaster bookshop, Taylor and Colbridge, is in a 1929 reprint of the Collected Poems of James Elroy Flecker (Martin Secker), and is a part of this book's history.

The copy was given to the young John Wall as a prize, and Wall would later write, under the pen name Sarban, a number of acclaimed novels and short stories, including The Sound of His Horn (Davies, 1952). Wall said that one of the reasons he wanted to master a difficult Oriental language was having been ‘inflamed by Flecker’s poetry’ (Mark Valentine, Time, A Falconer: a Study of Sarban, Tartarus Press, 2010, p.16). The book would have been purchased by his school from the shop which is to the right in the period photograph below: 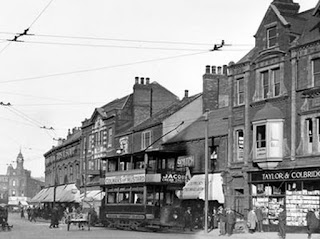 As Mark Valentine notes in Time, A Falconer:

‘And so, at the age of twenty-three on 27th November 1933, Sarban, as he put it, ‘set out from Doncaster for Beirut’. The phrase is in one sense an encapsulation of his life’s journey, from a rather grim and mundane railway junction town to one of the most cosmopolitan and exotic cities of the East' (ibid, p.21)

That labels add history to a book's ‘provenance’ might be overstating the case, but collectors are strange creatures, and there is always the concern that, as with bookplates, some might remove booksellers’ labels to stick them in an album, thus denying them their context. There are a couple of websites online where booksellers labels are displayed, but neither say what books they were found in. Discussing the subject with a bookdealer recently he admitted that he looked out for labels from certain women booksellers because he had a customer for them. The books they came in, though, were irrelevant.

The most common labels are obviously from the better-known, long-lived bookshops, such as Heffer, which has been in business for over 140 years, opposite Trinity College, in Cambridge. Such a long history means that Heffer's labels are not rare. 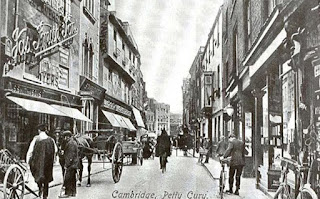 (Cambridge: Heffer's Bookshop is on the right)

Naturally, Oxford also has its historic bookshops, such as Blackwell:

(In Arthur Machen’s The Chronicle of Clemendy, Martin Secker, 1925) 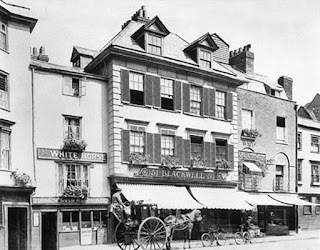 For collectors, in theory, this label from R. Hill & Sons, whose bookshop was next to the Oxford Oratory is more difficult to find, and therefore of more value?

(In A Book of Dear Dead Women by Edna Underwood, Melrose, London, 1912) 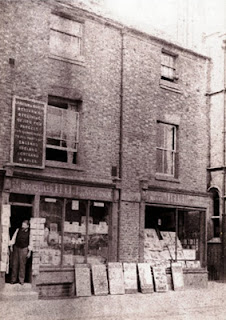 It is gratifying to think that Underwood’s single collection of decadent short stories, with its wonderfully euphonious title, was obtained through a rather more obscure bookseller, beyond the city centre.

The second part will discuss some London and overseas labels.