The majority of labels I have found in my collection are from London, and the single most common ones are from the Times Book Club (1905–c.1960s), which had reading rooms in central London where subscribers could borrow, read and purchase books. 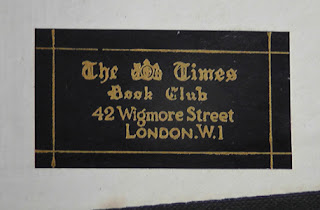 Of course, London also has bookshops with very long histories, such as Foyles, which was founded in 1903 in Peckham. In 1904 they opened their 16 Cecil Court shop, and in 1906 they moved to 135 Charing Cross Road. Around the time of the First World War their central London shop relocated to 119 Charing Cross Road, called the Foyles Building, where it remained until 2014. They currently have a chain of seven shops in the United Kingdom. 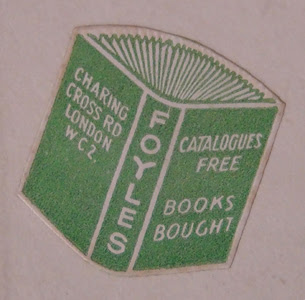 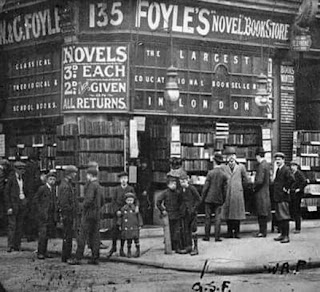 The Foyles Charing Cross Road labels are relatively common, but it is not so well-known that at one time they also had a branch in Cape Town: 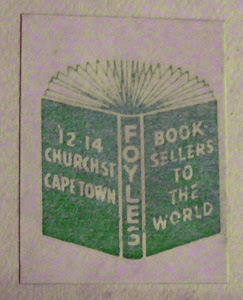 The above label is in a copy of Haply I May Remember, by Cynthia Asquith (James Barrie, 1950), and the book obviously travelled from England to South Africa, and has come all the way back again. However, it hasn’t travelled as far as my copy of The Glory that was Grub Street which came from Angus & Robertson’s in Australia: 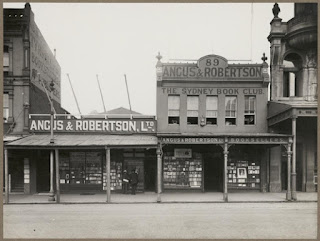 Back in the 1980s when I first became interested in the 1890s decadents, I bought a copy of The Poems of Ernest Dowson (John Lane, The Bodley Head, 1917) from the Trafalgar Bookshop in Brighton. (I’ve since discovered that the decadent stock they held came from Brian Banks at the Déjà vu/Gromoire Bookshop further down Trafalgar Street.) I was pleased with the find because, although only a seventh edition, the book still had Beardsley’s very simple, loopy design in gilt on the green boards. Additionally, it had pasted on the front fixed flyleaf a miniscule book¬seller’s sticker, in black and gold: ‘W.H. Smith & Son, 24-8 rue de Rivoli, Paris’. Although Smiths was a little common and corporate, the address was perfect. 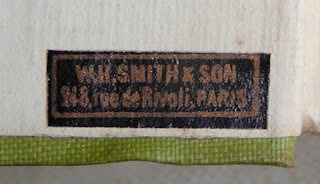 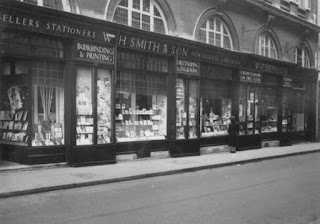 A copy of Forty-Three Drawings by Alastair came from Paul Elder and Co. I assume it will have been sold in the old 1898 store at 238 Post St, San Francisco: 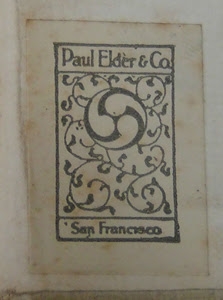 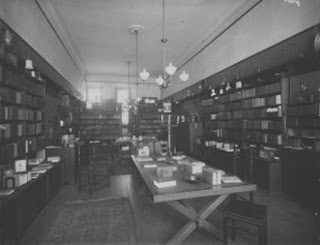 I have to admit that some foreign labels have a certain cachet, such as the one in a copy of Strange Houses of Sleep, a book I have because Arthur Machen co-wrote a chapter with A.E. Waite, ‘The Hidden Sacrament of the Holy Graal’. Georg et Co were on the rue du Rhone. 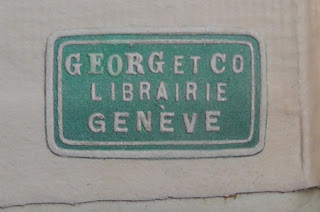 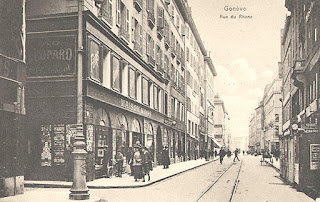 It was while researching the bookshops that Machen discusses in his autobiographical writings (Far Off Things, Things Near and Far and ‘When I Was Young in London’) that I started looking out for booksellers' labels. Machen mentions Denny’s Bookshop, Reeves and Turner, and David Nutt. I’ve not seen labels for any of these, but I hope that they exist somewhere and that I might come across them one day. Failing that, a label from any of the bookshops that used to be on the late, lamented, Holywell or Wych Streets in London would be a small, ephemeral piece of history worth preserving.

London changes all the time and it feels as though I have a small fragment of its past in a copy of Cleopatra by H. Rider Haggard: 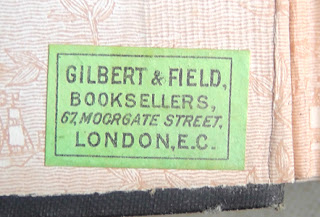 Gilbert and Field have long since left Moorgate, and I’ve found out very little about them. However, another book has given me a slightly better glimpse of the past. A copy of Modern British Authors was originally bought from the Bedford Bookshop at 2a Hand Court.

Although Hand Court still exists, it has since been redeveloped. It certainly adds to the interest of a book if one comes across a photo such as the one below: 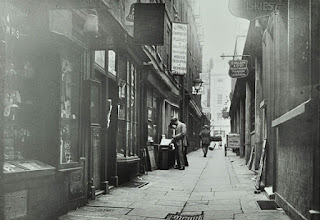