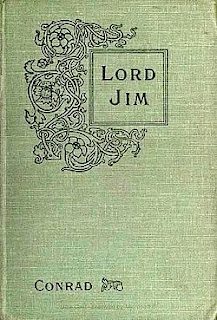 Turnstile One (1948), edited by V S Pritchett is an anthology of contributions to the New Statesman and Nation, mostly from 1931 onwards. It contains, under ‘Essays and Reviews’, a piece entitled ‘Tuan Jim’ by Petronella Elphinstone, from 1932.

This is an unusual piece of Conradiana. The five page sketch is an alternative version of Lord Jim (1900) in which the title character did not, as in the original story, abandon a ship full of pilgrims, but instead steered it safely into port, won praise for his coolness, continued his career in the merchant navy, and eventually settled on shore to run a ship’s chandler’s. It concludes, ‘This is the true story of Tuan Jim, as told me by himself.’ It is very nicely done.

The mystery is, who was the author? There is no Petronella Elphinstone in the catalogues of the major public libraries, so she probably never published a book. Her surname is that of an eminent line of Scottish nobles: but she does not seem to appear in the extensive peerage records for that house.

Her name, however, does occur in an unexpected context. A poem by Guy Davenport, ‘The Resurrection in Cookham Churchyard’, on Stanley Spencer’s celebrated painting of that scene (1924-7), lists in resonant phrases some of the supposed figures emerging from their graves. It includes the beautiful lines: ‘In pleated light and diamond bone/Comes Petronella Elphinstone.’

Most of the other characters in Davenport’s poem are well-known: they include the Tudor judge Sir Edward Coke; Karl Marx; John Ruskin; and Edward Lear. But no annotator, to my knowledge, is able to explain where he got the name of Petronella Elphinstone. Spencer’s painting does include portraits of some friends and contemporaries, and possibly Elphinstone was one of these. Or perhaps Davenport had read the New Statesman piece or some similar literary work and decided to make use of the author’s memorable name in his poem.

I have a feeling I am missing something obvious either about the author or her enjoyable piece of Conradiana. Any information or speculation will be welcome.