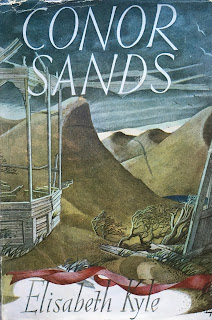 All along the coasts of Britain there are lost places that have succumbed to the sea, sand or silt. The North Sea in particular is a fierce assailant of the land, and in winter storms cliff-falls, moving dunes, shifting river courses are still known. The most renowned example of a largely destroyed settlement is the medieval city of Dunwich, Suffolk, once a thriving seaport but now reduced to a small village: however, there are other East Anglian harbours and sea-havens that have a similar, if not quite so notable, history. The shores are haunted by drowned settlements, and in legend their church bells still toll beneath the waves.


Elisabeth Kyle’s Conor Sands (1952) is set in a fictional version of just such a place. There is a town on the headland which is reasonably secure, though it is swept by sea-gales and sandstorms several days a year and the grains get into the houses and grit the streets. But below, where there was once the beginnings of a fashionable beach resort, there are now mostly just huge sand drifts, half-covering the abandoned houses and chalets. It is still possible to wander with care among these if you know your way, and you may find lost gardens with haggard trees and sagging fences, and the crumbling ruins of the empty residences. Dreamers and loners go there.

A last few surviving houses of this settlement still straggle along the road to the main town, and the novel partly follows the lives of some of the inhabitants of these, including a valetudinarian and lovelorn young man and the sassy, sardonic young woman whom he admires. Both they and their homes seem to be living on a short lease, and there is a tense, doomy, brooding atmosphere in the book, which never quite tilts over into the fantastic but which still gives it a haunting quality.

There are several interweaving strands in the story, essentially each about people with secrets, but no one of these dominates to the extent that the plot can be summarised as being about them. One thread concerns some fairly genteel blackmail, another a mysterious disappearance, a third offers nicely observed satire of small town chatter and gossip, of the dull constraints of social convention. There is also a keen interest in the rebellious and unconventional, where the author’s sympathies perhaps mostly lie.

The storm does come again: there is a further vast invasion of the sands, and the story of a tragedy, and for a while the town enjoys a sort of celebrity because of this, with small coach parties coming to view the scene and hear the thrilling tale. Yet all is not quite what it seems.

Elisabeth Kyle was a pseudonym of Agnes Mary Robertson Dunlop, a prolific professional author of numerous books, including popular biographies, historical romances and stories for children. But this book and just a few others of hers seem to be, from what I can tell, quite different to these, and written from a different impulse. Others from her in the same period which seem to have similar qualities include Mally Lee (1947) and A Man of Talent (1948). The second of these has points in common with Conor Sands: it takes place at a decayed resort in Normandy, again with sinister aspects.

These books are devised to compel, certainly, but not quite so overtly as her other work to be pleasantly pleasing: they are sombre, austere, pessimistic, and even have aspects in common with the fiction of Phyllis Paul, say, or Elizabeth Taylor, or Kathleen Sully. Indeed, a few were published in the same ‘Gothic’ paperback series as one or two of Phyllis Paul’s, in both cases somewhat incongruously. These typically have cover artwork of long-tressed heroines in nightgowns fleeing a lowering mansion.

The publisher of the original hardback editions of this group of Elisabeth Kyle's books was Peter Davies, doomed always to be known as 'the original of Peter Pan', since he was as a boy a leading inspiration for J M Barrie's perennial character. But he should be better known for his career as an imaginative and discerning publisher.

He was himself drawn to the uncanny, as he explained to the diplomat and fantasist Sarban, whom he published about the same time as Conor Sands, and I can imagine that he admired her work in this vein because he saw in it just that sort of elusive strangeness he relished.

But how to explain it to readers? The dustwrapper description of Conor Sands tries to get across its unusual, complex mood. It says it is not a crime story nor a thriller, though it has elements of both. It adds: ‘Miss Kyle’s growing public has come to expect from her a blend of suspense and realism, a heavily charged atmosphere . . .’ You can sense a struggle here to convey just what it is about the book that is so morbidly compelling, but this it certainly is.

I think it may come down to a sense of fatefulness: the book is pervaded by a strange, inexorable quality. Whether her characters acquiesce in their destined role or try to defy it and claw out their own way of life, that other remorseless sandfall, the running hourglass of time, will diminish them all in the end.