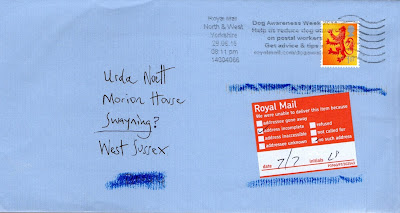 When I was reading The Witch by David Lindsay, in the version edited by J B Pick and published alongside The Violet Apple (1976), I was struck by a curious phrase about Morion House, the dream or visionary place seen by Ragnar, the novel’s protagonist. It read:

“Morion House—unknown to the Post Office, since nobody lives there, as it possesses neither roof nor walls, is unnamed in any book . . .”

‘Unknown to the Post Office’ was in one way a serviceable sort of expression, stating a simple everyday fact. Yet it put me in mind of the standard but somehow quite ominous terms used by the Royal Mail on returned letters: ‘Not Known’; ‘Gone Away;’ ‘Refused’; ‘Not Called For’ and so on.

These have always seemed to me to have a terse poetry about them. They might be the titles of Walter de la Mare stories.

Anyway, a while ago I decided it would be worth finding out if Morion House was indeed unknown to the Post Office, so I addressed a letter to Urda Noett, the Witch of the title, at the address given, such as it is, by Lindsay in his book.

I then wondered what I would do if I got a reply. Fortunately, perhaps, I did not. But the Post Office did its duty. It tried to deliver the letter, but it could not find the town of Swayning, putting a question mark against it (Lindsay doubtless meant Steyning). The letter was returned. 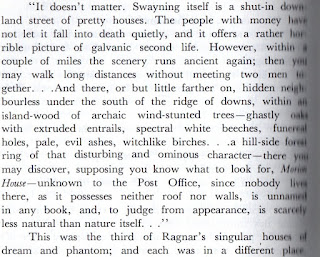 So David Lindsay was quite correct. And Morion House, it seems, remains unknown to the Post Office.

But that was a few years ago. And now another idea occurs to me. The Royal Mail has just introduced a new Home Collection service for parcels from private houses, the biggest change in their services, they aver, since the introduction of post boxes.

What if I were to ask them to collect from Morion House?

For it must be there, if anywhere, that holds in keeping the lost pages of Nightspore in Tormance . . . and of course the full, final manuscript of the work that Lindsay said was, ‘as to its material, one of the world’s greatest books’— The Witch.