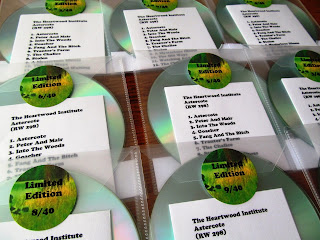 A recently released recording on the Reverb Worship label is Astercote by The Heartwood Institute. I was entranced by the subtle way the music conveys a haunting narrative involving a holy cup kept in an English country house. It's a story told in brief musical segments, like the soundtrack to a half-forgotten Seventies tv mystery episode, each piece illustrating a key scene. There's the same adventurous use of early electronic or radiophonic textures, together with wistful, pastoral pieces using woodwind and other acoustic instruments. Individual tracks aptly conjure the image suggested by the titles and the plot-line, such as the shimmering surrounding "The Chalice" and the sense of hovering and swooping accompanying the hawk.

I hadn't realised until after I had listened to this resonant, delicately-crafted gem that it is an "imagined soundtrack" based on a 1970 young adult novel by Penelope Lively, entitled Astercote, which I didn't know before and would now like to read. The label says: "The music on this cd is influenced by some favourite 1970s soundtracks : The Wickerman, Get Carter...that kind of thing, but also the more out-there TV soundtracks like The Changes, Children Of The Stones and the original Tomorrow People." I think it achieves the atmosphere of that time and those programmes perfectly, while also having a fine, yearning fragility all its own. This edition of Astercote is limited to 40 copies.