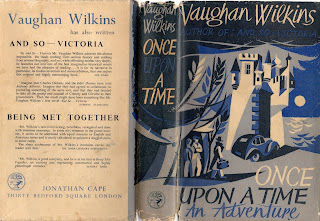 Earlier, we looked at Fanfaronade, a timeslip story. Timeslips, and resonances across time, are also found in the novels of the curiously forgotten mid-20th century author Vaughan Wilkins (1890-1959). His books, with strikingly designed dustwrappers, were nearly all issued by Cape. They are mostly historical fictions, with a rather Dickensian air, full of rumbustious characters and picturesque incidents. He seems to have been particularly interested in Victorian times, and wrote a textbook on the Industrial Revolution.

An exception is Valley Beyond Time (1955), a fantasy in which a legendary island appears off the coast of South West Wales. This is lyrically described and the book has a lightly-touched mystical dimension. The American tycoon in the story is a bit too much of a conventional casting, but Wilkins is not the only author to have used this improbable stock figure. Otherwise, the young family caught up in the miraculous geography are freshly and appealingly drawn. His other fantasy work includes City of Frozen Fire (1950), a lost race novel.

Once Upon A Time, An Adventure (1949), is an historical fantasy described on the dustjacket flap (illustrated here) as “this most exuberant and eventful of all Mr Vaughan’s books”. It certainly crams in a great deal of invention, starting with a secret discovered in the Prince Consort’s study by the newly acclaimed King Edward VII. It then moves to contemporary times (the Forties) where Warrack, described as “a sort of Robin Hood” and “a sort of Scarlet Pimpernel as well”, the leader of a gang of European outlaws, is in pursuit of the lost treasure of the Grand Duchy of Ehrenburg and is up against renegade Nazis as well as the police.

Until recently, even the bare facts of Wilkins’ life were not easily discovered. But a reading group connected with “Reading 1900-1950”, the Sheffield Hallam University special collection of popular fiction, tackled his work in November 2013, and one of their number researched his background. This revealed that Wilkins was not, it seems, Welsh, despite the Welsh settings of some of his books, and his Welsh-sounding name.

The official sources say he was born in Camberwell (London) in 1890. His father, a parson, was born in Nottingham and his mother, a singer and music teacher, was born in London. Wilkins seems to have been a working journalist most of his life, and his novels did not begin until his maturer years, when he was 47. It's not clear why his books have fallen from view. They may have seemed somewhat older than their time when they were published: quite long, with a strong delight in storytelling for its own sake, full of the unlikely and extravagant,and mostly romantic adventures. Has anyone else read him: which of his books do you recommend?

A CHECKLIST OF BOOKS BY VAUGHAN WILKINS