THE MUMMY AND SIDNEY SIME 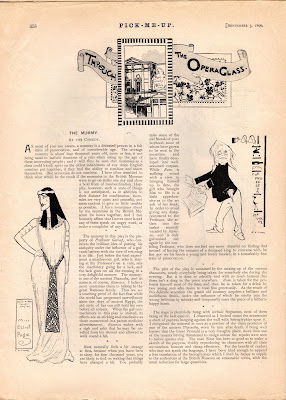 Before he became the illustrator of work by Lord Dunsany (principally), Arthur Machen and William Hope Hodgson, the fantastic artist Sidney Sime provided artwork for various periodicals, notably comic journals, such as The Idler (which he owned and edited for a short period) and Pick-Me-Up. The latter was a weekly penny journal of about eight flimsy pages containing satirical cartoons and light humorous prose.

The magazine generally had a theatre review column, ‘Through the Opera Glass’, and the issue for September 5, 1896, contains a two page notice of a comedy called The Mummy. Sidney Sime provided portraits of the four leading players. These included Lionel Brough, by then a veteran comic actor, as the Mummy, and Elliott Page, who often performed in Wilde’s plays, as Hattie von Tassel-Smythe, the young woman who reanimates the ancient king. Sime's picture of the Mummy includes his rendition of the hieroglyphics on the papyrus used as a backdrop.

The review says: “The Mummy is a thoroughly enjoyable farce, and it has had the advantage of being written by two gentlemen who appear to have a very good grip of the subject”. However, it neglects to name the authors. 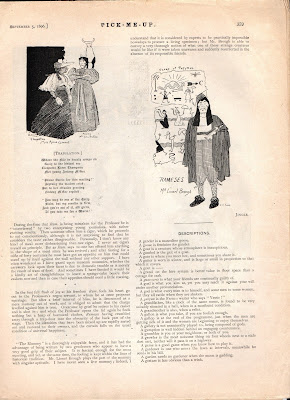 The Mummy was in fact by George Day and Allan Reed, and originally produced at the Comedy Theatre in London, from 11 August 1896. It was later performed at the Garden Theatre, Broadway, from November 1896. It is barely mentioned in theatre histories and then only briefly, as a failure. There seem to be few further traces of the two writers. A copy of a poster for a touring production of the play, by the artist Hassall (1868-1948) is held by The Victoria & Albert Museum.

The comedy had no doubt been produced in response to the contemporary vogue for Egyptology. The archaeologist E A Wallis-Budge had published his study The Mummy: chapters on Egyptian funereal archaeology in 1893. Theo Douglas’ fantasy Iras: A Mystery, in which an Egyptologist is haunted by the spirit of a mummy he has excavated, was published in the same year as the play. Other novels and stories involving mummies followed thickly through the late Victorian and Edwardian periods, but the play seems to be amongst the earliest yarns involving a revivified mummy.

Day & Reed’s farce does not seem to be discussed in The Mummy’s Curse by Roger Luckhurst (2014), the most recent study of the mummy in popular culture. The Pick-Me-Up review, by ‘Jingle’, gives an account of the plot. Professor Garsop “conceives the brilliant idea of putting his antiquity under the influence of a galvanising battery with the view of restoring it to life”. But before he can complete his work, “a mischievous girl, who is staying with the Professor on a visit, sets the machinery going for a lark, and the lark goes on all the evening in a very delightful manner”.

The revivified pharaoh, inevitably called Rameses, relishes his new existence, and the rest of the play seems to revolve around mistaken identities, with the mummy thought to be the Professor himself throughout most of it: under this illusion two young journalists take Rameses out for a drink or several, with comic consequences. The play concludes with a piece of stage conjuring: the mummy climbs back into his casket and when the lid is opened again nothing is left but his cerements.