Count Stenbock in the TLS 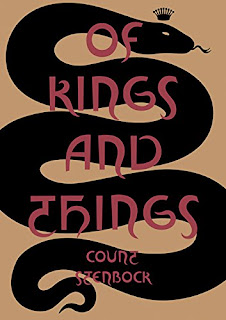 It's nice when mainstream reviews like the TLS pay some attention to our small corner of the literary world, and nicer when they sincerely appreciate a landmark volume of the weird. This has happened in a recent issue of the TLS, with Kate Hext's review of Of Kings and Things by Count Stanislaus Eric Stenbock. Published by Strange Attractor and magnificently edited by David Tibet, it collects the bulk of Stenbocks known literary output, comprising some fifteen stories and over thirty poems, and an essay and a play.  A number of these were available previously only in limited edition fine press volumes, so it is especially good to have an affordable assembly in one volume, with an introduction of about thirty pages (amply illustrated with photos and manuscript writings) by Tibet, and an afterword by Timothy d'Arch Smith.

The life of Count Stanislaus Eric Stenbock was short and enigmatic. Born into the European aristocracy in 1860, he spent his early life in England and Germany. By the mid-1880s he was an Oxford dropout: living off his vast inheritance while writing poems and stories, with a pet monkey in the crook of his arm and a snake draped about his neck. In the 1890s opium took hold; he died aged thirty-five in 1895, earning his place in the “Tragic Generation”.

Though now almost forgotten, Stenbock was arguably “the most decadent of the decadents”, as David Tibet suggests in his introduction to this new and most welcome volume of his work, Of Kings and Things. Actually, Stenbock’s seeming embodiment of the decadent as author belies his singularity. Almost always, as with Oscar Wilde, this image is a carefully cultivated sham: a languid pose masking industry and ambition, not to mention a want of capital. Whereas Stenbock seems to have been the genuine article, drinking only champagne and bruning bank notes if they became soiled. (23 & 30 August 2019, p. 5)

Of Kings and Things is available in both the UK (Amazon.co.uk link) and in the US (distributed by The MIT Press; Amazon.com link).  This is one of the most essential volumes of the year.

Posted by Douglas A. Anderson at 2:30 PM