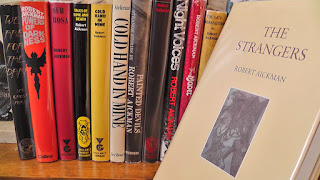 In 2014, after several years wondering why Bowling Green University Library seemed to have such an odd and incomplete collection of material by Robert Aickman, we discovered that the author’s full literary archive was still in private hands here in the United Kingdom. It had been passed on to Heather Smith, a friend of Aickman’s and his literary executor (after the death of his original executor, Felice Pearson).

We visited Heather and Graham Smith to consult the archive and spent many fascinating hours looking through it and talking to them about their friendship and Waterways campaigning with Aickman. We were also able to make a full inventory of the archive which contains, among other material, the finished typescripts of nearly all of the forty-eight strange short stories for which Aickman is acclaimed, as well as his longer works of fiction, autobiography, philosophy and non-fiction. Aickman also kept copies of most of his published and unpublished writings, as well as professional and personal correspondence.

It was through Heather and Graham’s enthusiasm, generosity and friendship that we were able to put together and publish The Strangers (Tartarus Press, 2015), a collection of previously unpublished and uncollected writings by Aickman. Reading the typescript of the title story we felt that it was as good as any of his published tales. (We later learned from Aickman’s friend Jean Richardson that ‘The Strangers’ had probably not been offered for publication because it too closely described living people.) Two stories that we published in the book were subsequently selected for annual ‘Year's Best’ anthologies.

Several years before this, Leslie Gardner at Artellus Ltd (for decades the literary agents for Robert Aickman’s work) had first mentioned to Heather that she might consign the Aickman archive to a library so that it could be properly conserved and made easily available to researchers. Finding a home for the archive was conducted by Leslie’s contact, Peter Grogan (formerly of the Gekoski group), whose knowledge of the international market in this field cannot be underestimated. The result of Peter’s skilful work has been the acquisition of the archive by the British Library — the best possible home for this treasure trove.

It has taken some time for the Aickman archive to be collated and the acquisition announced, but it will soon be available at the British Library in central London. (Aickman’s waterways archive can be likewise consulted at the National Archives in Kew, although there are also a few waterways papers at the Boat Museum at Ellesmere Port.)

To celebrate the acquisition of the archive, the British Library is hosting an evening of readings and discussion with special guests including Ramsey Campbell, Leslie Gardner, and Jeremy Dyson. ‘Even Stranger Things: A Night for Robert Aickman’ will be held on Fri 10 Nov 2017, 19:00 - 20:30. Tickets are available from the box office.
Posted by Mark V at 11:09 AM