The London publisher Victor Gollancz (1893-1967) clearly had a soft spot for eclectic books, including fantasy. Twice during his lifetime he published a series of fantasies, though he carefully avoided calling them such.

The first series he called "The Connoisseur's Library of Strange Fiction," subtitling it "A Series of Reprints."  He announced five books though in the end he published only four.  In numbered order they were:

1. A Voyage to Arcturus, by David Lindsay.  Published August 1946 at 8s 6d, just a little over a year after Lindsay's death.  Gollancz had bought the publishing rights to Arcturus and The Haunted Woman from Lindsay's widow. This edition includes a one-page "Publisher's Note" by Victor Gollancz, which publishes for the first time the (accurate) statement that of the small 1920 first edition of Arcturus, "596 copies were sold and 824 'remaindered.'" Most rare booksellers have latched on to the first number and ignored the second one, making the first edition of Arcturus seem all the more rare.  But those 1,430 copies were in fact sold, as the original publisher's ledgers confirm. 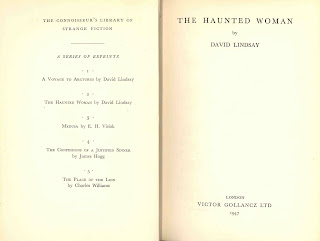 4. The Confessions of a Justified Sinner, by James Hogg.  No Gollancz edition was ever published.  The Cresset Press published an edition in September 1947.  Perhaps Gollancz didn't want to publish a book which had a planned competing edition.

5. The Place of the Lion, by Charles Williams.  Published in February 1947 at 7s 6d. Gollancz himself had published the first edition of this book in 1931.

The second series of reprints came a few decades later, under the title "Rare Works of Imaginative Fiction: A Series of Re-Issues." This time Gollancz published, in three groups, eight of the nine titles that he announced. Three are reissues from the 1946-47 series: 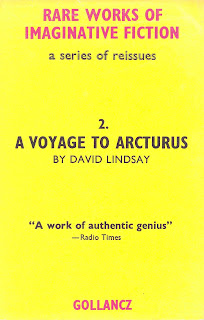 5. The Greater Trumps,  by Charles Williams. Announced but never published. Gollancz himself had published the first edition of this book in 1932. 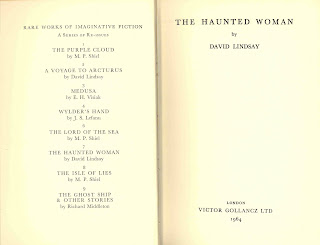 In all, these titles lived up to the advertisements describing the series as "The Connoisseur's Library of Strange Fiction" and "Rare Works of Imaginative Fiction."
Posted by Douglas A. Anderson at 3:00 AM