I was in the UK last week to attend a couple of conferences in Oxford and Brighton.  While in Brighton I took the opportunity to spend an hour or so at The Keep, which houses the East Sussex Record Office and other local collections.  Looking through microfilmed newspapers of the Brighton and Hove Herald and the Evening Argus I found the following notices of R.R. Ryan's death: 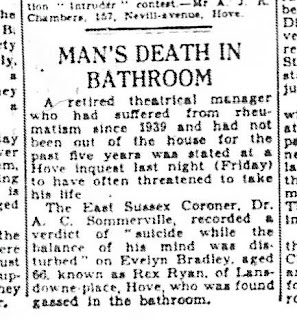 "A retired theatrical manager who had suffered from rheumatism since 1939 and had not been out of the house for five years was stated at a Hove inquest last night (Friday) to have often threatened to take his own life.
"The East Sussex coroner, Dr A.C. Sommerville, recorded a verdict of "suicide while the balance of his mind was disturbed on Evelyn Bradley, aged 66, known as Rex Ryan, of Lansdowne place, Hove, who was found gassed in the bathroom." 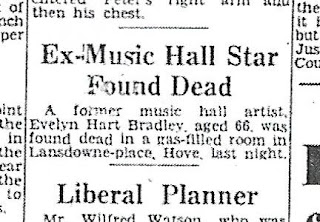 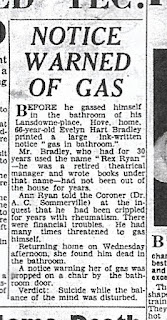 "Before he gassed himself in the bathroom of his Lansdowne-place, Hove, home, 66-year-old Evelyn Hart Bradley printed a large ink-written notice "gas in bathroom."
"Mr Bradley, who had for 30 years used the name "Rex Ryan" - he was a retired theatrical manager and wrote books under that name - had not been out of the house for years.
"Ann Ryan told the coroner (Dr A.C. Sommerville) at the inquest that he had been crippled for years with rheumatism.  There were financial troubles.  He had many times threatened to gas himself.
"Returning home on Wednesday afternoon, she found him dead in the bathroom.
"A notice warning her of gas was propped on a chair by the bathroom door.
"Verdict: Suicide while the balance of his mind was disturbed."

A sad end to a fascinating life - clearly poor health and financial difficulties had taken their toll.  The last notice refers to his novels and shows that he was known as a writer.