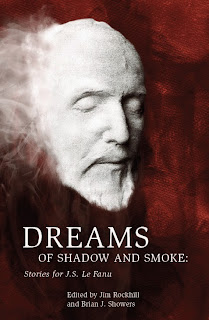 The Swan River Press of Dublin has announced a tribute anthology to mark the 200th anniversary of J Sheridan Le Fanu's birth. Dreams of Shadow and Smoke, edited and introduced by Jim Rockhill and Brian J. Showers, will be published in August and collects ten new stories of the fantastic and macabre in the tradition of the Irish master. Contributors include Sarah Le Fanu, Peter Bell, Angela Slatter and Derek John: also included is my story "Seaweed Tea".

As I say in the note to my story, "J. Sheridan Le Fanu was the first ghost story writer in English after Poe to take the form seriously. He took it out of the realm of the folk ballad, the comic yarn and the stylised melodrama of the Gothic tale, into a new realm of literary subtlety. He also recognised its potential for exploring visionary experiences." This affectionate and original homage, beautifully designed, aspires to do justice to his stature.