The Pallid Lily Press: A Checklist

With thanks to the Press' publisher and designer, David Cowperthwaite. All pieces by John Gale unless stated. 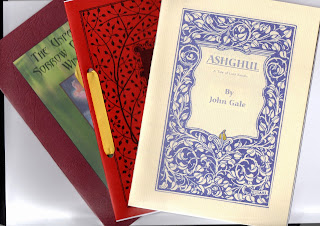 A Rhapsody for the Goddess of Autumn, For Three Female Voices, With Improvised Music on Cithara, Flute and Two Tabla. Yellow parchment paper cover, with two pages, bound in a gold ribbon, and enclosed in a white envelope with cream paper labels, with an autumn leaf attached to top left corner by gold ribbon. November 2001. Limited to 10 numbered copies.