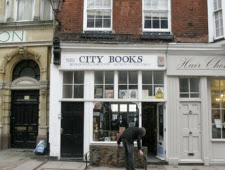 The most useful and comprehensive guide to secondhand bookshops in Britain is The Book Guide, ironically but inevitably an online resource. I consult this whenever I visit a new place or revisit old haunts after an absence, so that I have a good idea of what bookshops might be found there. In the tradition of the enigmatic bookhound Drif, the guide also publishes readers' comments on bookshops, sometimes effusive, but not infrequently quite pungent.

The Guide has just announced a melancholy figure. The news item in the Shops section tells us: “I’ve just closed my 500th secondhand bookshop” – meaning, of course, that the guide has just reached that figure in its continuing record of closures and (less often) openings, since it began in 2001. Allowing for some that came and went unrecorded, this suggests about 40 secondhand bookshops are closing each year.

However, we’re more cheerfully reminded that the Guide still lists 1,176 secondhand bookshops. It adds that 225 of those are run by charities. It also tends to interpret “bookshop” broadly, so the figure includes some premises only open by appointment, and some general antique centres that sell secondhand books – in my experience, these can sometimes have quite small stock.

Even so, this works out as about one secondhand bookshop every 80 square miles. In practice, of course, the spread is uneven. The Guide’s handy format of listings by regions, then counties, shows how desolate some parts are – or appear to be, unless they have secret bookshops in obscure quarters as yet undiscovered. Even some large cities don’t have a single secondhand bookshop anywhere near the centre, except charity bookshops.

But there are still quite a few parts of the country where the enthusiastic reader or collector could easily spend a week visiting secondhand bookshops within a reasonable radius – using, say, York, Norwich, Edinburgh or Hay-on-Wye as a base, for example. And there are even more where a quite crowded weekend would be needed to visit them all. I know, because I’ve sometimes done it. Further, the Guide, though a splendid source, is not of course infallible - it's always worth asking around.

It's also worth adding that even bookshops, interpreted generously, are only one part of the secondhand book scene in Britain. The Book Guide also lists book fairs and auctions, and as well as the established ones here it’s not uncommon to find locally organised fairs.

Some churches also now have secondhand books for sale – perhaps only a few boxes, in the porch or under the tower or next to the postcards and parish newsletters and the faded black-and-white guide written by a former parson forty years or so ago. I’ve often been delighted, in some quiet village with no shop or inn or other facility, to find the church has unexpectedly interesting reading matter with a faint odour redolent of pew-polish or beeswax candle still lingering about it.

If fetes, jumble sales, public library sales (alas) and bric-a-brac shops and sundry other places are added, it's still possible to find secondhand books passing from hand to hand in all sorts of odd, out of the way and unexpected corners of these isles.

(Image of City Books, Rochester, one of the locations for the film The Last Bookshop).
Posted by Mark V at 10:25 AM