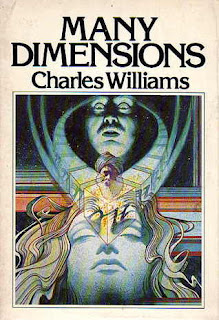 There has not, so far as I know, been any full study of the Metaphysical Thriller form. However, I was heartened to find, after I had formed my own sense of the field, one essay that had earlier noticed that these books belonged together. In the late Nineteen Forties the poet Peter Russell edited a quarterly magazine called Nine. It seems to have been a last flourish of the aesthetes and mystics against the kitchen sink realism which took over in the Fifties. Number Nine of Nine (Summer/Autumn 1952) included a long, thoughtful and well-informed essay on the novels of Charles Williams, by Antony Borrow.

This begins by noting that, ‘In the last few decades a number of novelists have used a magical or supernatural background for purposes of spiritual allegory, as distinct from grotesquerie or deliberate arabesque, although that is often an ingredient.’ He then lists Mary Butts, Aleister Crowley, Dion Fortune, David Lindsay, C.S. Lewis and Charles Williams. This was not far from the list I had at first come up with, though I have since added others. Borrow, an interesting figure of the Neo-Romantic movement of the Forties and after, did not, however, go on to study any of these authors other than Williams.

Most of the authors of metaphysical thrillers all belonged to the same generation. They were typically born in a fifteen-year time-span from the mid-1880s to the early Edwardian period, most of them indeed within four or five years of each other. Some of them knew each other, or of each other, but I am not in the least suggesting they make up a movement, with organised aims: they are more illustrative of a tendency. Their childhood years were spent in the Victorian twilight, the fin-de-siecle, and their formative youth and early adulthood in the Edwardian first decade of the twentieth century, both periods now understood as having marked characteristics. Though their books mostly appeared in the interwar period, their outlook was formed in the new mood of the Edwardian era.

There were, of course, authors working in a field similar to this, born in a somewhat earlier period, the 1860s and 1870s, such as Arthur Machen, Algernon Blackwood, May Sinclair, G K Chesterton, Evelyn Underhill. Although these were important precursors, they were not part of the same generation, and therefore culture, as the interwar group. However, David Lindsay and Walter de la Mare, though they belong chronologically to this earlier generation, did not publish their major work until later in life, and were therefore working in the same milieu as the later group. Borrow’s timescale, of books ‘in the last few decades’ before 1952, seems to be broadly right, but it also raises the question whether the form continued into the Forties and Fifties. I can’t yet think of many obvious examples but this seems worth a look.

The background to the metaphysical thriller form was the growth of interest in beliefs other than those offered by the mainstream churches in Britain, Anglican, Roman Catholic or Non-conformist. This took many forms: an exploration of Eastern Religions, eg from India and China; new movements such as Spiritualism and Theosophy; artistic trends with mystical aspects such as Symbolism, Decadence or the Celtic Twilight. Some of these influences will be seen either subtly or overtly influencing the ideas explored in metaphysical thrillers.

Others draw on the congeries of beliefs now known as the Western Mystery Tradition, a perspective or movement in ritual magic that draws on systems of symbols such as the Kabbalah, the Tarot, Alchemy, Rosicrucianism, Neo-Platonism, Hermeticism, the Grail, Astrology and others. Williams, for example, used many of these in his books, as did Fortune. Some of these authors it is true, while rejecting the tepid conventionality of the churches, were attracted to the more ritualistic aspects of their ceremonies. They often came to this after first exploring the esoteric.

Charles Williams, for example, was to become a High Church Anglican, but he developed some unusual ideas of his own and was earlier a member of orders practising ritual magic, the successors to the Hermetic Order of the Golden Dawn. His latest biographer, Grevel Lindop, finds some evidence that Williams continued in esoteric orders alongside his theological work. This element in his life and work is sometimes considerably underplayed, even denied, by his more devout champions, but his thrillers are absolutely rich with occult ideas, and these are not always those of his villains. Some of the protagonists with whom he most sympathises, even identifies, are attracted to them too.

Similarly, Mary Butts navigated to a High Church Anglican position under the influence of Hugh Ross Williamson and Father Bernard Walke, a priest in Cornwall, but she was earlier associated with Aleister Crowley’s occult orders, and indeed Crowley recognised that she taught him much: and she never abandoned her deep interest in esoteric ideas. Her journals frequently invoke the unorthodox (and indeed semi-pagan) symbol of the Grail.

Not all of the ideas explored in these books can be precisely defined. Sometimes there is a form of nature-worship or pantheism, at others a kind of secular mysticism (the development of secular mysticism is another area that could do with further study). Perhaps there may be a sense sometimes, too, of the possibilities of the arts as a passageway to the unseen, especially music. Others are about the spiritual absence at the heart of our lives, and a consequent longing for, reaching out to, some experience or dimension other than the world we know. Sometimes other dimensions are elusive, just beyond reach: there is the sense of a brink, which we approach, but from which either we draw back, or which draws back from us.

But what these books have in common, even if they use different symbols and argue for contrasting beliefs or ideas, is a keen questing imagination. These writers were not content to describe the outer reality of the world presented to them, but wanted to go beyond that. They were still, usually, interested in the lives of their fellow creatures, but they did not suppose those lives consisted only of their families, their jobs, their leisure (if they had any), their vices and their virtues. The authors of metaphysical thrillers thought that we move in a world which may reflect or refract a greater reality, and it was this and its profound effect on us that they wished to explore.

Part 1 of this note was The Rise of the Metaphysical Thriller.