The Centenary of A VOYAGE TO ARCTURUS

One hundred years ago today, on 16 September 1920, the most remarkable novel of the twentieth-century was published by Methuen of London:  A Voyage to Arcturus by David Lindsay.  The recognition of this novel's special qualities was slow to come. It was not reprinted until 1946, the year after its author's death.

In the August 1946 reprint, publisher Victor Gollancz noted that "of the small [first] edition that was printed, 596 copies were sold and 834 'remaindered'."   The statement is nearly correct, but it has often been misinterpreted to imply that the first edition sold only 596 copies, and no more.  Methuen initially printed 2500 sheets, but only ordered 1000 to be bound.  The book sold so minimally that by February of 1921 Methuen wasted 1000 copies of the sheets, and the other copies were bound up and sold over the next five years.  In all, 1,500 copies of the first edition were sold before the book went out of print.

Victor Gollancz reprinted another new edition in June 1963, and finally the first American edition was published by Macmillan in October 1963, but for this edition the entire novel was line-edited, resulting in thousands of changes to Lindsay's text, ranging from re-punctuation on to alterations of more significant words and phrases. Unfortunately this corrupted text became the base text used by many publishers, in England as well as in America.  The corrupt text also turned up on the internet, and as a result most of the reprints done over the last few decades replicate the flawed text.

The first paperback edition came from Ballantine Books. It had five printings in the US through 1977 (two with the Unicorn masthead of the Ballantine Adult Fantasy series), and two printings in the UK from Pan/Ballantine in 1972 and 1974.  A further UK printing from Sphere appeared in 1980.

The novel began to receive real recognition in the 1960s, following a radio dramatization that had been done on the BBC in 1956. Since then, it was made into a student film by Bill Holloway in the early 1970s (watch it here, where it is misdated to 1979); appeared as an opera in Los Angeles in 1985; and last year was made into a strange heavy metal musical in Australia (see the website here). [For more on Bill Holloway, see this old Worwoodiana post here.]

Here follows a cover gallery of some of the editions of A Voyage to Arcturus. 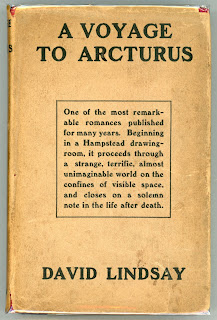 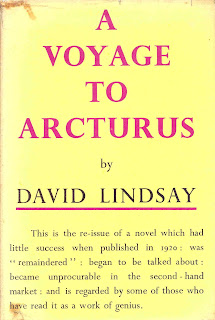 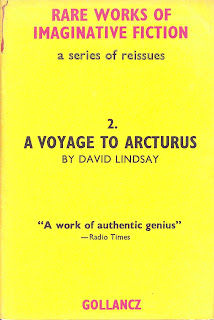 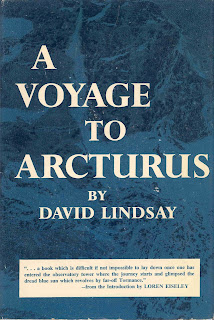 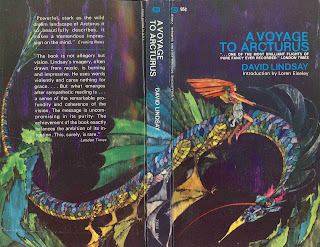 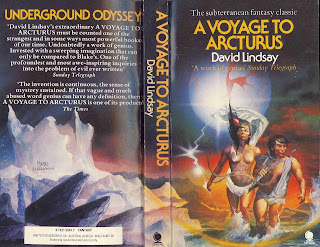 UK Methuen, 1920.  The only edition proofed by Lindsay himself.  I have noted six typos in the text. The US Gregg Press, 1977 edition is reproduced photographically from the 1920 original edition, and thus contains the exact same text.

The text was reset for the UK Gollancz, 1946 edition. Inevitably, there were some minor alterations (e.g., in chapter one “She [Mrs. Jameson] received him gravely” is mistakenly altered to “She received him bravely”), but the text remains fairly sound. The UK Gollancz, 1963 edition is reproduced photographically from the 1946 edition, as are its reprints (1968, 1971 and 1978).  The US Citadel Press, 1985 edition is also photographed from a Gollancz text.

Other editions reset from the Gollancz edition include: the UK Canongate, 1992 (and a 1998 reprint); and the US University of Nebraska, 2002 edition.

The US Macmillan, 1963, edition was line-edited introducing many hundreds of changes throughout the novel.  Some are merely punctuational, but many are stylistic, altering words, phrases and word order.

This corrupted text has proliferated in many editions, including all five printings (1968-1977) of the (reset) US Ballantine Books edition; both printings (1972 and 1974) of the UK Pan/Ballantine edition; the UK Sphere, 1980 edition and the UK Allison & Busby, 1986 edition (which is in fact photographed from the Sphere resetting); the UK Savoy Books 2002 edition; the UK Fantasy Masterworks, 2003 edition; and the US Dover 2005 edition. Most POD editions use the corrupt text from the Gutenberg file.

Labels: A Voyage to Arcturus, David Lindsay, Douglas A. Anderson