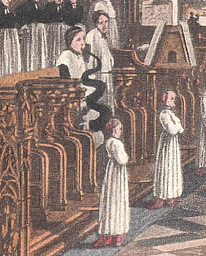 Ulric Daubeny was a young antiquarian who published a book on Orchestral Wind Instruments, Ancient and Modern (1920) and another on Ancient Cotswold Churches (1921), both charming, well-illustrated works which exhibit the author’s keen interest in his subjects.

However, they had been preceded by a more unusual volume: The Elemental, Tales of the Supernormal and the Inexplicable (1919), a rare book. The stories in this perhaps have a Jamesian inspiration but also have original elements and an enthusiastic brio

One of the more unusual of these stories, entitled ‘The Serpent’, does not derive its plot from some legendary demonic wyrm slithering over the land, but from a medieval musical instrument, also discussed in his book on the woodwind family. The device takes its name from its shape, a sinuous polished wood cone with a brass mouthpiece.

Inevitably, with a name like that it has attracted a certain amount of lore. Readers of the tale, or the study, might well have speculated upon what it sounded like. There is an extensive website dedicated to the Serpent (the source of the illustration above), edited by Paul Schmidt, at serpentwebsite.com, which gives its history, construction, a discography, filmography and bibliography and offers back-issues of its serpentine newsletter.

Now, however, there is the opportunity to hear the call of the serpent in an appropriately eerie setting. The Dutch musician Rutger Zuydervelt, known as Machinefabriek, has released a CD and digital album, Luchtwezen (‘Creature of Air’), where he coaxes deep emanations from a church organ while avant-garde jazz musician Berlinde Deman augments this with eerie vocals and the long lonely groans of the serpent.

Originally they had planned to perform this together at the Oude Kerk Charlois in Rotterdam, but when this was not possible they recorded the piece remotely. It is a strange and haunting composition, the perfect complement to Ulric Daubeny’s tale.