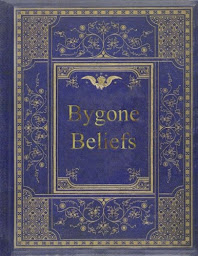 Annie Winifred Ellerman, 26, a bohemian in Paris, published under the name of ‘W. Bryher’ (citing an island in the Scillies she liked) an autobiographical novella, Development, about the artistic and spiritual progress of a young woman.

Walter Whately Carington, 28, a former pilot in the Royal Flying Corps, founded The Psychic Research Quarterly. Vol. 1, no. 1 was issued in July 1920 (later entitled Psyche). He also published in 1920 The Foundations of Spiritualism and A Theory of the Mechanism of Survival. He tended to favour the possibility of telepathy.

Herbert Stanley Redgrove, 33, a chemist and founder of The Alchemical Society in London, issued Roger Bacon: The Father Of Experimental Science & Mediaeval Occultism and Bygone Beliefs: Being a Series of Excursions in the Byways of Thought, discussing Mediaeval Magic and Alchemy.

Florence Sarah Conway Williams, 34, the wife of the publisher’s editor, mystic, poet and novelist Charles Williams, issued Christian Symbolism, With seventy-seven illustrations as by ‘Michal Williams’ (the name given to her by her husband).

The poet and Ministry of Labour clerk Frank Stuart Flint, 35, issued his Otherworld: Cadences, in which he imagined another version of himself living on a far star, and described a neighbour, a carpenter, who saw a zodiac of roses in the night sky.

J S M Ward’s A Subaltern in Spirit Land, a sequel to Gone West (1917), recounted the author’s contacts with the war dead on the spirit plane. John Sebastian Marlow Ward was 35 years old, became a leader in the recondite Orthodox Catholic Church, and issued a series of apocalyptic prophecies.

Gilbert Eric Cannan, 36, a promising modern novelist praised by Henry James published The Release of the Soul, an attempt to explain the states of spiritual insight he experienced living on a remote farm in Africa, ‘like Eden’. Cannan spent the last thirty years or so of his life in asylums.

Arthur Sarsfield Ward, a 37 year old from Birmingham, who wrote as ‘Sax Rohmer’, published a mystery thriller using Ancient Egyptian imagery, The Green Eyes of Bast, and, in The Dream Detective, a set of episodes about a detective who solves crimes using his psychic powers. Ward claimed to have been an initiate in occult orders.

Mary Gladys Webb, 39, from Shropshire, novelist, published The House in Dormer Forest, the chronicle of a peculiar, stormy family in a brooding dark house.

The composer Cyril Meir Scott, 41, issued the pseudonymous The Initiate: Some Impressions of A Great Soul (as by ‘His Pupil’), a probably fictional memoir of a contemporary English mystic, Justin Moreward Haig, with a discussion of his ideas.

Joseph Charles Holbrooke, composer, 42, from Surrey but with strong Welsh affinities, produced ‘Taliessin’s Song’ for voice, piano and clarinet, and possibly also in this year Caradoc's Dream, for string orchestra.

David Lindsay, a former insurance officer worker from Blackheath aged 42, issued his vision of a journey from Starkness, North East Scotland, to a star, Nightspore in Tormance. The publishers preferred the title A Voyage to Arcturus. It sold 596 copies, many apparently bought up by a few sympathetic admirers.

Evelyn Underhill, 45, mystic and spiritual counsellor, published The Essentials of Mysticism and Other Essays, discussing spiritual experiences and focussing on practical, as distinct from historical, study.

James Lewis Thomas Chalmers Spence, a 46 years old Scot from the county of Angus, author, journalist and folklorist, issued An Encyclopaedia of Occultism: A compendium of information on the occult sciences, occult personalities, psychic science, magic, demonology, spiritism and mysticism. He also wrote about Atlantis.

Anne Douglas Sedgwick, 47, an American-born author resident in England from the age of nine, who had served in the Red Cross in France during the war, published The Third Window, an ambiguous Henry Jamesian ghost story about a war widow who imagines the spectre of her husband haunting the walled garden at their home.

Walter John de la Mare, 47, a former oil company clerk from Kent who had been awarded a government pension in recognition of his poetry, published in the January issue of the new literary journal The London Mercury a story of an encounter with strange children in a remote location, ‘The Creatures’.

Elizabeth Arnold, 52, issued Great Ganga The Guru Or How a Seeker Sought The Real under the name Kavta Kaumudi, a poetic meditation on the role of the Divine Mother in Hindu thought.

Granville Ransome Bantock, 52, composer, premiered The Great God Pan, a Choral Ballet for solo voices, chorus and orchestra at the Sheffield Festival, and composed ‘The Cloisters at Midnight (New College, Oxford)’ for piano.

A play by James Matthew Barrie, 60, Mary Rose, was first produced in April, in London. It depicts time-slips in which the eponymous heroine twice disappears when on a Scottish island, then reappears years later, unaged.

Arthur Ignatius Conan Doyle, M. D. LL.D., 61, (representing Spiritualism) conducted a public debate with Joseph McCabe (representing the Rationalist Press Association) at The Queen's Hall, Langham Place, London on March 11. An account was published as A Public Debate on the Truth of Spiritualism.

Henry Rider Haggard’s The Ancient Allan was issued, a story of Isis worship and reincarnation. The 64 year old, living as a country squire in Norfolk, a churchwarden and farmer, was already well established as a popular author of occult fantasies.

Charles Webster Leadbetter, 66, former Anglican priest, co-founder of the Liberal Catholic Church, Theosophist, issued The Monad and Other Essays Upon the Higher Consciousness and The Science of the Sacraments.

Mary St Leger Kingsley, the novelist who wrote as ‘Lucas Malet’, 68, published The Tall Villa, a ghostly romance of ‘love and the unseen.’

Jesse Laidlay Weston, 70 years old, poet and folklorist, published a monograph on the Holy Grail, relating it to ancient rites of fertility and kingship. From Ritual to Romance had a profound influence on poets and esoteric thinkers, most notably in providing a major theme for T S Eliot’s ‘The Waste Land’.

Charles Montagu Doughty, aged 77, renowned as an explorer and as the author of Travels in Arabia Deserta (1888), issued his poetic epic Mansoul, or The Riddle of the World, the culmination of his philosophical and mystical thought.

Alfred Percy Sinnett, 80, author and Theosophist, published Tennyson An Occultist as His Writings Prove, arguing ‘Tennyson was individually put into touch with teachers on a level far above that of ordinary humanity,’ as shown by ‘veiled hints’ in his work, and revealing that the poet was Edmund Spenser in a previous incarnation.

Edward Clodd, 80 years old, a retired banker, folklorist, and leading rationalist and sceptic, who had settled at Aldeburgh, Suffolk after a career in the City, published Magic in Names & Other Things.