A Museum in Autumn 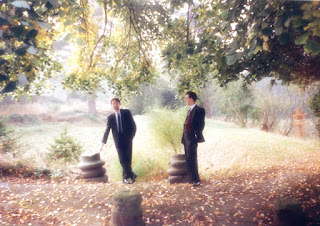 One day nearly thirty years ago I walked with two friends, an artist and a prose poet, underneath the Autumn trees in the grounds of a Roman museum. It was a weekday, and there was no-one else about. A breeze followed us, and the gold and bronze leaves cascaded down like the largesse of some celestial decadent emperor toying with his acolytes. On either side of the avenue were the broken plinths and columns of the Roman remains, pale as bones but streaked with green mildew.

We came up to one where either a chance windfall or the whimsical gesture of a modern votary had left a sprig of black berries on an altar-like stone. At once we thought that we too ought to offer something, and we each cast about for a suitable garnishing: a fir cone, a dog rose, a handful of beech-mast, a chaplet of the fallen leaves. These, with due solemnity and a certain diffidence, we placed on one or other of the monuments. But it seemed to us, then and after, that there was an elusive rare place-magic there and we had caught a glimpse, no more, of this, though we could not quite say what it was. The Romans, when they were not sure who the local god was, raised their altars to the genius loci, and that was who we too honoured.

The place was Aldborough in North Yorkshire, or Isurium Brigantum, a minor Roman settlement that never grew into anything much larger, so that its remains have not been so much covered over or demolished. The museum is hardly ever open now and wasn’t all that often then, but it had an interesting small display in a sort of wooden chalet, including some carved gems of carnelian and jet with curious mystical figures. At the end of the grove we had walked under, and through a wicket-gate, was a shelter and inside were two restored mosaics. Beyond were private grounds, a fallen tree covered with fungi, and the distant gables of a house.

This scene haunted me and I tried several times to put it in stories, never quite succeeding. But it influenced the Roman mosaic scene in ‘Except Seven’ (Romances of the White Day, Sarob Press, 2015) and the obscure museum in ‘The Forwarding Agent’ (Supernatural Tales 37, 2018), and some other tales too. 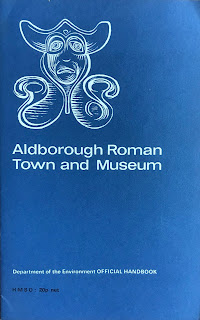 The HMSO guide to Aldborough, a slim booklet in blue covers, is by Dorothy Charlesworth, She also wrote a monograph (1999) on the remote and windswept Hard Knott Roman Fort high in the mountains of Cumbria, for the Cumberland and Westmorland Antiquarian and Archaeological Society; and contributed a note on the contents of the museum to the HMSO booklet by Graham Webster on the Roman site at Wall, Staffordshire (1958); and a similar note to the booklet on Viroconium, the Roman city at Wroxeter, Shropshire (1973).

In her Aldborough booklet the grey photographs are still able to convey something of the lonely sorcery of the grove, and the gems are indeed considered mysterious. They included a jasper intaglio of a hare in a chariot pulled by a cock, whose meaning is obscure, and a blue agate intaglio of a nude figure. I think there were others on display when we visited, or I have added to them in my imagination.

From the monograph I learn that the museum and its grounds had once formed part of the gardens of the Manor House and had been gifted to the nation by the dowager chatelaine in 1952. This perhaps helps account for the tranquil quality of the little domain. The site preserves the south-western quarter of the Roman town, with a section of the town wall.

The booklet also explains that there are known to have been other mosaics uncovered in the town but these have now been lost, although one is reputed to lie under the floor of the Manor, a circumstance which rather suggests some potential for the plot of a supernatural story. Indeed, more mosaics have been noted here than anywhere else in the country, suggesting perhaps the presence of a workshop devoted to the craft.

Like Old Sarum (the subject of an earlier post), Aldborough was for many years a Rotten or Pocket Borough, still returning MPs to Parliament for centuries despite its very moderate number of inhabitants. There were, however, at least some houses here, a population perhaps of several hundred or so.

The very last sentence in the guide is one of those wonderful throwaway lines: ‘Another figure of Mercury can be seen in the church’. Of course. Where else? And I remember that when we went there three geese had flown overhead as we passed into the church, and on the table for the parish magazine and the church guide someone had placed for sale entwined sprigs of rosemary.

And there it was, the blurred statue of the herald deity, his face hardly to be discerned, never mind understood. But I put the few coins in the collecting box and picked up a sprig of rosemary and placed it at his feet. For it is always wise to pay homage to the god of words.