The Return of the Zahir 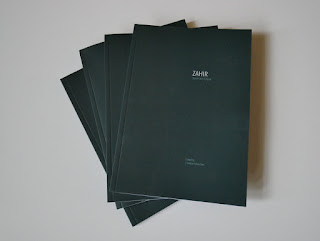 At Zenopress, Zahir – Desire and Eclipse, an anthology edited by Christian Patracchini. This is a book of responses to Jorge Luis Borges’ short story ‘The Zahir’ from The Aleph and Other Stories (1949), about a talismanic coin that becomes a symbol for obsession.

But the coin, it transpires, is only the latest manifestation of an idea that has previously taken other, different forms.

This new publication is a book of visions told in various forms – story, poem, essay, text, image, and it is limited to 200 numbered copies.

The introduction reports ‘this anthology explores how the Zahir – something both very serious and vaguely absurd – sticks on our minds and refuses to be shaken.’

City maps, a matchbox, an old boat, pomegranate juice, the shadow of the rose, a reclusive author in Paris, tea and biscuits, cheap brandy, a red neon sign, they’re all here, briefly. And any one of them may seem to provoke memories, echoes.

Of course, some caution is required: after all, the anthology, or one of the pieces in it, could easily be the latest appearance of The Zahir. What better sly disguise than to reappear in an edition bearing its own name? Who would suspect that?

Just as it passed to Borges casually enough in a bar in his change for a drink, so it might slip into our thoughts again in the most brazen way, in a book that is a hall of mirrors of itself.

Should you find you cannot stop reading the book, or turning its pages all the time, it would be wise to slip it into an overcoat pocket, wander by devious ways to an obscure bookshop in an unfrequented quarter of the city, and there see if you can smuggle it onto the shelves unseen.

Perhaps between, let us say, Cyril Crossland's Desert and Water Gardens of the Red Sea, and the Imperial Army Handbook to Lamp Signalling and Ciphers.