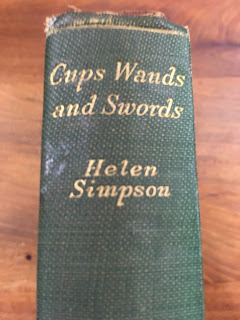 The Greater Trumps (1932) by Charles Williams is a powerful metaphysical thriller inspired by the symbolism of the Tarot cards. According to his latest biographer, Grevel Lindop, Williams possessed a copy of the Marseilles pack, and probably also the Rider-Waite pack. He may have learned aspects of the Tarot from A E Waite, since he was an initiate in the latter’s Fellowship of the Rosy Cross.

However, his book was not the first novel to use the Tarot as a guiding motif. As a widely-read editor at the Oxford University Press, in touch with contemporary fiction, Williams may also at least have heard of an earlier novel involving the cards.

Helen Simpson’s Cups Wands and Swords (Heinemann, 1927) begins with a Tarot reading, and each chapter is named after a Tarot card. The novel follows a group of young bohemians in Chelsea and Oxford in the 1920s. Tony and Celia Riddle are orphaned twins, by turns tender and quarrelsome with each other. From an old and fairly well-off Australian family, they were separated when Tony was sent to public school in England at an early age, while Celia remained behind. He now has the Oxford accent while she still retains Australian intonations: but the differences seem to go deeper than that.

In the opening chapter, Dominick, an Irish friend of Tony, reads the cards for Celia and finds them difficult, puzzling. The book will, in oblique ways, follow the fall of the cards and illuminate what they may have meant. The ambience of the book is not unlike Mary Butts’ modernist Grail novel Armed With Madness (1928), also about tempestuous bohemians getting involved with the esoteric.

The mystical and supernatural in Helen Simpson’s novel, apart from the influence of the cards, is subtly drawn. The first hint is when Celia, looking at the sunlight glinting on a teaspoon, seems to hover close to another dimension and is briefly able to read her brother’s thoughts. Shared understandings are not uncommon in twins but here it is implied that this is more than that: she ‘receives’ a picture of what he was thinking. The possibility of telepathy between twins is strongly present throughout the novel.

Supernatural incidents and impressions continue to pervade the book, not forcefully but allusively, interweaving with the lives of Celia, Tony and their friends. There is a glimpse of the majestic figures from a 17th century grimoire, and there is a seance in which a mysterious form links three of those present.

Aspects of the book are evidently autobiographical. Helen Simpson was born in Sydney but came to England as a young woman in her late teens and made her home there. Celia’s responses to the country and its contrasts with her homeland are fresh and observant and no doubt reflect her own experiences. She also evidently had an interest in the esoteric, and shared this with two close writer friends, Clemence Dane (with whom she collaborated on detective novels) and Gladys Mitchell.

She was thirty years old when Cups Wands and Swords, her second novel, was published. It shows a keen, sophisticated understanding of the Tarot symbolism. There are today hundreds of Tarot designs and Tarot-like oracle cards, but in her time it would have been a much more arcane matter. No doubt, however, it became better-known as part of the upsurge of interest in the esoteric that followed the Great War (see, for example, my catalogue for 1920 in an earlier post). Packs could be obtained from Rider, the noted occult publisher, and no doubt from certain avant-garde emporia.

T S Eliot’s allusion to the ‘wicked pack of cards’ consulted by Madame Sosostris in ‘The Waste Land’, first published in periodicals in late 1922, no doubt gives a sense of the Tarot’s reputation just a few years before Helen Simpson was writing her novel.

As well as the Tarot and the subtle supernatural elements in the book, another attraction is the cast of picturesque characters, particularly the minor characters. These include a female conjurer, who occupies the top floor of the lodging house where Tony and Celia live, and imbibes ‘port and splash’ (of soda) for her health; and a foppish Oxford aesthete who is a connoisseur of incense and rare liqueurs.  Another brief supernatural moment occurs when she burns one of the incense cones he gives her and the smoke begins to form a shape. Again, incense, now widely available in new age shops and elsewhere, was evidently still regarded then as exotic and faintly suspicious.

The emotional tension of the book derives from Tony’s dislike when his twin becomes attracted to one of his friends, Philip. He at first finds devious ways of preventing them meeting, but then acquiesces, thinking he will be able to retain his influence over her. Partly this could be due to his feeling of being ‘in loco parentis’ and responsible for his sister, who has not his experience of cosmopolitan life, but he is also presented as petulant and possessive. The plot follows Celia’s halting liberation from this. There is a powerful, eerie, well-devised ending involving an apparition that may be in part psychological in origin but yet also strongly implies a supernatural presence.

Helen Simpson went on to write ten more novels (including the collaborations), several of them historical. Boomerang (1932) won the James Tait Black Memorial Prize, then perhaps the leading prize for fiction, and Under Capricorn (1937) was filmed by Alfred Hitchcock. She also wrote two historical studies, some miscellaneous non-fiction and a handful of plays.

The Australian Dictionary of Biography notice by Alan Roberts evokes her thus: ‘Handsome, dark, with 'bright brown eyes' and a determined chin, Helen was a fine horsewoman and fencer, who collected antiques, Elizabethan cookery books and works on witchcraft. She had great charm and vitality and developed a forceful style, with a touch of showmanship in some mannerisms such as taking snuff.’

While the Williams novel is told with his customary gusto and clamour, Helen Simpson's Cups Wands and Swords offers a nuanced treatment of the Tarot and its possibilities, but is equally compelling. It is an excellent example of an intelligent metaphysical thriller with contemporary edge, and ought to be better-known among savants of the esoteric and the fantastic. 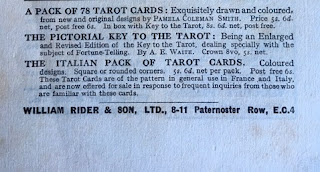