The Rockall Books of Antony Swithin 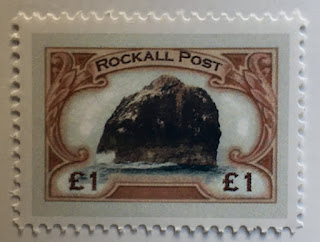 The lonely Atlantic island of Rockall is over 300 miles from the coast of Scotland. The stormy rock was claimed by the UK in the Nineteen Fifties as an outpost of Inverness-shire. A few well-equipped adventurers have set up camp there for a short period, with logistical support, but it is otherwise completely uninhabitable

As part of my Strange Stamps series with artist Colin Langeveld, I issued in 2005 a  Rockall Post £1 sepia stamp depicting the gaunt outcrop in its ocean fastness. It was in support of the Rockall Ho! Expedition, raising funds for the charity Mental Health Media. The stamps were used on first day covers designed by Discworld Stamps, along with a sister stamp designed by them, with Terry Pratchett’s approval.

Stamps issued for offshore islands around Britain, with no Royal Mail service, have quite a long history, and the most noted include those for Lundy, Shuna, the Summer Isles, Herm in the Channel Islands and Steepholm in the Bristol Channel. The Rockall stamp was in the same tradition, if for a somewhat more far-flung outpost.

Rockall has several times featured in fiction, including in T H White’s young adult novel The Master (1957), about a super-villain who has his headquarters there.  This more-or-less depicts the actual Rockall, except that it is hollow and has a huge sinister complex inside it, in classic James Bond style.

However, there is also a vast, sweeping alternate-world version of the island in which it is a much more extensive territory, complete with its own history and customs. This was created by the eminent geologist William Sarjeant (1935-2002), under the pen-name Antony Swithin. It also brings in aspects of the lost continent of Atlantis, the drowned realm of Lyonesse, and the mythical land of Hy Brasil.

Four books of this epic fantasy were issued in paperback by Fontana from 1990-1993 under the series title The Perilous Quest for Lyonesse: Princes of Sandastre (1990); The Lords of the Stoney Mountain (1992); The Winds of the Wastelands (1992); and The Nine Gods of Safaddné (1993).

There was, however, much more in the author’s papers still to be published. He had worked on the details of this world for many years.

Doug Anderson describes the books as “an impressive feat of world-building and story-telling” and when I tried them I found them colourful, vigorous and thoroughly-imagined. I wouldn't say that mysticism and the visionary were to the fore, but the narrative is strong in pace and incident.

Now, Doug has drawn my attention to The Perilous Quest For Lyonesse, a new website about the series, which has been re-launched under the editorship of Mark Sebanc. The first two books are available now, and it is reported there will be twelve in total.  The website offers the background to the books, a video, a blog and other supporting material.