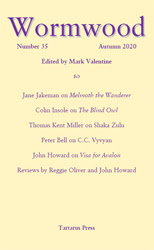 Wormwood 35 has just been published:

Jane Jakeman marks the 200th anniversary of Charles Maturin's Melmoth the Wanderer with a celebration of the complex Gothic novel and its creator.