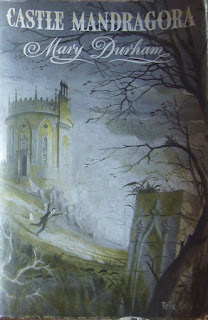 An enticing title,  and it has wonderful Neo-Romantic cover art by Felix Kelly. He specialised in Gothick country houses and illustrated fantastical books such as Herbert Read’s The Green Child (1945),  an edition of  Le Fanu’s A Strange Adventure in the Life of Miss Laura Mildmay : a tale from Chronicles of Golden Friars introduced by Herbert van Thal (1947), and To the Devil A Daughter by Dennis Wheatley (1954).

The setting of this novel is also unusual, at a remote folly in the Brecklands area of Suffolk. This is a large expanse of sandy heath mostly given over to heather and bracken, but now also with dense serried fir tree forestry. It is notable for the ancient monument of Grime's Graves, prehistoric flint mines in a lunar sort of landscape that looks unreal: empty yet pockmarked. You can, upon payment of an admission charge, descend into one of the pits by a ladder and enter a gallery. I didn’t fancy it. Idols have been found there.

Castle Mandragora by Mary Durham (1950) is not predominantly a novel of the supernatural, it is more of a crime thriller, though it has eerie elements to it.

An educated young man loses his job as an advertising clerk during the Depression of the Thirties and in desperation agrees to take up a post as a footman. He gets the job through the influence of a friend, a solicitor, and in fact he has a secret role, to keep an eye on things at the castle and report back anything suspicious. His friend is uneasy about aspects of the set-up, though he cannot quite say why.

His employers are two eccentric brothers. The other staff there are aged and mostly semi-senile: they include a querulous librarian. The castle is circular and the living quarters cover two floors: we are provided with a diagram showing the rooms and staircase.

The parts where the protagonist is learning his job and getting to know the layout and somewhat somnolent ways of the castle are rather painstaking, before the mystery element (a bit brisker) takes over. There is an incidental ghostly scene, rather sentimental, and not, as one might expect in a crime novel, fully rationalised.

Although in many ways following conventional formulae, there was just enough about the book that was distinctly odd to give it an unusual flavour. The resolution is not entirely unexpected, but it is deftly handled. The austere scenery and the picturesque castle are well-evoked. The claustrophobic atmosphere and the unusual characters give the book a particular peculiarity.

Mary Durham wrote eleven thrillers, including others that have Gothic elements, in the Forties and early Fifties, and then seems to vanish. Nothing whatever seems to be known about her. Usually such an abrupt career might portend that this was an experienced author running a sideline under a pseudonym: or, conversely, that the author changed direction and adopted a different name for later work.

But if so in neither case does any clue about this seem to have emerged. It’s also possible this author just couldn’t find publishers after that mid-century spate, even though her later work also seems to be among her strongest.

Forked Lightning was picked up by the Thriller Book Club in 1952 and is therefore much easier to find than the others. This too has a dramatic, Modern Gothick dustwrapper. But some of the other titles seem to have disappeared almost as thoroughly as their author.