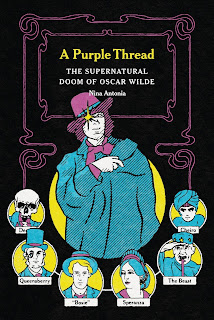 A Purple Thread by Nina Antonia is an elegant prose meditation on the sense of the fateful in Oscar Wilde’s life and work. The supernatural pervades his writing and The Picture of Dorian Gray alone places him with Machen and Stevenson as a leading figure in the decadent macabre.

But there is also often a particular fascination with the idea of destiny, even if it is sometimes at first treated flippantly, as in the palmistry reading in Lord Arthur Savile’s Crime, which the title character feels he must fulfill.

In a blog post on her publication, Nina explains that it was inspired in part by an often-unregarded memoir, Aspects of Wilde (1936) by Vincent O’Sullivan, and comments: ‘One paragraph in particular, where the author notes that Aubrey Beardsley was amongst many who believed that to own any of Oscar’s books was unlucky, stayed with me, just as the music from a song does, playing over and over.’

And this thought prompted the theme explored in the chapbook, the sense of a tragic doom in Wilde’s career, which is reflected also as a preoccupation in his fiction and drama.

The chapbook is characterfully illustrated by Nathaniel Winter-Hébert and is a special publication of the Fiddler’s Green imprint, whose by-line is ‘Art & Magic for Tea-Drinking Anarchists, Convivial Conjurors & Closeted Optimists.’