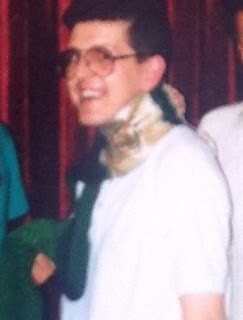 I was greatly saddened indeed when I learned in January that my old friend Jeffrey Dempsey had died. Jeff was the co-editor of the 1980s journal Dark Dreams with David Cowperthwaite, a friend since school-days. The two had begun by publishing chapbooks on an old duplicator.

Dark Dreams ran for 9 issues from 1984 to 1992 and published the early work of many writers who went on to publish more widely, including Simon Clark, Joel Lane, Ron Weighell, Mark Morris, John Howard, A F Kidd and D F Lewis. Jeff and David also published my own first story, ‘The Grave of Anir’.

Jeff also ran his own Crimson Altar Press and published a booklet of fantasy poetry edited by John Howard and booklets of ghost stories by Mary Ann Allen and David Rowlands, as well as my own 14, Bellchamber Tower. Jeff was later a co-founder of The Ghost Story Society.

I first met Jeff at a Fantasycon along with David, John Howard, the artist Colin Langeveld, Joel Lane and others. We soon started an informal group, The Doppelgangers, and for many years some of that group have enjoyed bi-annual weekend gatherings for book-collecting expeditions and good company.

Jeff was quite simply a lovely man:  kind-hearted and thoughtful, and with a characteristic Liverpool sense of humour. He had enormous enthusiasm for the supernatural fiction field, especially M R James, Lovecraft and Machen, and a particular fondness for the Jules de Grandin stories of Seabury Quinn, whose cod-French catchphrases he would quote with relish. He also greatly enjoyed the Mapp & Lucia novels of E F Benson and had their arch phraseology often on his tongue too.

Another great enthusiasm of Jeff’s was the music of the glam rock years, particularly Marc Bolan and T Rex, and The Sweet, and in their teens he and David were in a band, The Wounds, in emulation of these favourites. I remember Jeff wincing as he recalled peeling off the shiny stars that he used to paste on his face.

He also relished tales of occult detectives and was in theory the creator of one himself, Mr Chaucer Wills, whose adventures we shall now most unfortunately never know. No meeting went by without us asking when we should at last hear of these, but Jeff would merely look enigmatic.

I owe to Jeff, and David, several lifelong friendships, my first ever story publication, and lots of shared pleasures. It is deeply sorrowful that Jeff is no longer with us. As my colleague Mr Howard would say, quoting Mapp & Lucia, au reservoir!, old friend. And, in Mr Bolan's fine phrase: Ride a white swan!