I'll Tell You Everything 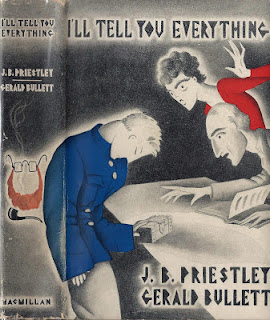 I’ll Tell You Everything, A Frolic by J B Priestley and Gerald Bullett (1933) is a story-telling romp in the style of Robert Louis Stevenson’s New Arabian Nights, G K Chesterton’s The Club of Queer Trades or Arthur Machen’s The Three Impostors (though not nearly so macabre as that). That is to say, a sequence of connecting episodes, extravagant, more or less unreliable, with a final explication that just about holds things together.

A young Cambridge academic, an expert on Dark Age history and the decline of the Byzantine Empire, happens to share his train compartment with an Italian gentleman, who asks him to hide a steel casket. It is wanted by some ugly customers who may be lying in wait for him at the terminus. He explains it holds the relics of the Prophet Yann (a Dunsany-ish name) which have the power to ignite the whole of Central Asia.

The casket is then pursued through numerous bewildering adventures, in which further, different explanations of its ‘true’ import are given, often starting with the supposedly frank phrase of the book’s title. There are disguises, pursuits, practical jokes, sleights of hand, deceits, shadowy characters and more.

If the destination doesn’t quite live up to the fantastic parade leading up to it, nevertheless the reader has had a lot of colourful, quick-witted, light-hearted yarn-spinning en route. And there is a nicely artful coda too, which exhibits that these two stalwart authors were up to the tricks and twists of post-modernism years before.

The novel is similar in style and tone, though even better than, J B Priestley’s first novel, Adam in Moonshine (1927), about a Jacobite conspiracy in the wilds of Yorkshire, and it prefigures Bullett’s two picturesque detective novels under the name Sebastian Fox, One Man’s Poison (1956) and Odd Woman Out (1958), both well worth reading too.

What comes across most of all from the book is the sheer gusto of the yarn-spinning. I don’t know how the collaboration worked, but I several times wondered if each author had written alternate chapters, and had contrived to set up the most improbable scenario possible for their colleague to unravel, in a wild and hilarious friendly rivalry. In any case, this is an entertaining, picturesque tale told with accomplished skill and great enthusiasm.