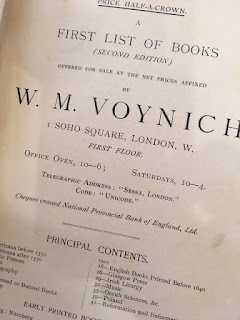 E. Millicent Sowerby was a young Edwardian student at Girton College, Cambridge, who had acquired a great love of old books, especially from her grandfather’s well-appointed library at his house in Bridlington on the North Sea coast in the East Riding of Yorkshire.

At the end of her studies she was not sure what to do next. She wanted to work with books but she did not want to be a librarian, which she thought largely involved filling in index cards. By a series of, as she herself admits, very lucky coincidences, she was introduced to a well-established antiquarian bookseller in Shaftesbury Avenue (previously at Soho Square), and after a slightly peculiar interview with its eccentric proprietor was taken on there as an assistant cataloguer.

Her job there only lasted two years because the outbreak of the First World War meant the business was largely moved to the USA and she was no longer required. But nevertheless she was to remain a book cataloguer for the rest of her working life, over forty years. She was next taken on at Sotheby’s to fill a war-time vacancy but in peacetime found that prejudice against women cataloguers in the old-school English book trade prevented her getting work.

She therefore took up professional appointments in the USA, where there was no such prejudice (quite the reverse) and during a distinguished career was entrusted by the Library of Congress with a five volume catalogue of Thomas Jefferson’s library (1952-59). Earlier, while there she resumed her friendship with her first employer, who was still now based in the USA.

In 1967 she published her memoir Rare People and Rare Books, which is told in a lively style full of light humour and breezy anecdotes and suggesting a personality that must have been forthright, dauntless and high-spirited, alongside her serious devotion to her work. But it is no reflection on her book to say that it might now be of interest mostly for keen bibliophiles and fellow professional cataloguers were it not for an unusual significance.

The bookseller that Millicent Sowerby first worked for as a young woman was none other than Wilfred Michael Voynich. This remarkable and in some respects controversial figure is renowned for his discovery of what is now usually called “the Voynich Manuscript”, a strange medieval work handwritten and hand-painted in what appears either to be an unknown language or an undeciphered code or both. Further, it has many curious designs of hybrid humans, beasts, plants, stones, stars, planets and chimera.

Though there have been various theories about the codex and every so often a scholar claims to have worked out what it is, it remains enigmatic and has therefore excited a considerable amount of commentary and speculation. One theory is that it is a very clever forgery and that Voynich must have been involved in this in some way, although this is now thought unlikely following scientific tests and because of the sheer complexity of such a task. Partly this idea was fuelled by Voynich’s own colourful past.

The bookseller of Shaftesbury Avenue was originally a scion of the Polish aristocracy in Lithuania who had been imprisoned as an agitator for Polish, and peasant, freedom by the Tsarist Russian authorities then occupying that land. He had escaped from imprisonment and made his way to join other exiles in London where, in due course, he started his bookselling business.

He specialised in finding impossibly rare books, and indeed once issued a catalogue consisting entirely of books once thought completely lost or not to exist. Perhaps one of the reasons for his success, apart from his energy and resourcefulness, was that he spoke numerous European languages (“all badly” he modestly said) and so could negotiate directly with sellers and sources, unlike his monoglot or at best vaguely duoglot English counterparts.

Millicent Sowerby’s book includes a 40pp appreciation of Voynich, and it is one of the few detailed descriptions of him, a vivid first-hand testimony. She gives a frank, affectionate portrait, not glossing over – in fact, rather relishing – his sometimes stormy temperament, but also emphasising his generosity, kindliness, old-world courtesy and integrity. This depiction has perhaps been too little regarded among theorists of the Voynich MS and ought to carry more weight. It is not uncommon for writers about the MS to overlook her book altogether.

And yet his young cataloguer does refer directly if briefly to the famous MS, which she refers to as “the Roger Bacon cypher”. This is because it was originally thought to be associated with the medieval friar and magician. She tells us quite definitely that it was found in “a castle in Southern Europe” by Voynich himself on a book-buying expedition in Europe in the Summer of 1912. (To an English person then, ‘Southern Europe’ would include Southern Italy, which is probably where indeed the MS was obtained).

She knows this because she had in fact written to him to ask for a job while he was away on this trip, and he replied on his return, despite being busy with all the interest in the cipher. She started there in December 1912 and witnessed the many connoisseurs and scholars, including astronomers and botanists, calling in to look at it. It is useful to have this personal, first-hand evidence of the origins of the MS from someone who was there, in direct association with Voynich, and who was accustomed to being meticulous.

Of course, it could always be argued by those who want to that Voynich had misled her and everyone else as to what the MS was and where he got it, but any reader of Millicent Sowerby’s book will recognise her as a remarkably shrewd and canny individual. Furthermore, her account of the stream of experts coming to look at it does not suggest that Voynich thought he had anything to hide.

Millicent Sowerby’s book is of interest for its recollections of the antiquarian book trade in the early part of the 20th century and  her monumental work on Jefferson’s library,  and for her own vivacious character. But it is also valuable for its vignette of Wilfred Michael Voynich and the milieu in which he presented the strange and elusive MS that now bears his name.